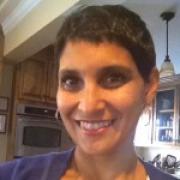 Ilina Ewen
Share This
Add your voice to the comments

Photo credit: Francois Polito, Sculpture of “Non-Violence”by Carl
Fredrik Reuterswärd
He was a braggart about his guns. He told my sons about packing heat and spoke in hyperbolic detail about the other-worldly power and rush that shooting a gun can jolt. He spoke of a violent testosterone fueled definition of manhood and linked masculinity to a love affair with guns. He told my sons about a shoot out at a cafe where an armed patron shot thieves. He spoke with no compassion, only a sense of OK Corral shoot ‘em up caricatures. He guffawed about how “badass” the gent was who pulled out his gun and smirked at the thought of a cafe shootout, wishing aloud he could just have that chance too. My sons were 8 and 6 years old. After this conversation they were a bit frightened by this man, by his ideals, by his complete disregard for sense and safety. They no longer greeted him heartily and didn’t want to meander into his yard.

His views now represent the state of North Carolina. Forget access to a public education and healthcare. Come to North Carolina if you want to pack heat!

Well, North Carolina, now it’s time to beat the heat. And I’m not talking about the humid temps of summer.

Via Senator Josh Stein: “I am disappointed to report that the Senate voted to enact the gun bill permitting guns at our public schools, at our universities, on playgrounds, in parades, at work for state employees, and at bars and restaurants serving alcohol. The Senate also abolished the Racial Justice Act. Not a good day.”

The shooting at Sandy Hook Elementary School should have been rock bottom for our country.

Neither Congress nor the North Carolina General Assembly has made a tiny baby step toward thwarting gun violence. My own two sons experienced a lock down at their elementary school last fall. They were scared but safe. I cannot even let my mind wander into the rough edges of what the Sandy Hook parents must have felt. I shiver when my psyche ventures there.

So just today, the North Carolina Senate voted to allow guns in public schools, on playgrounds, and at bars. I mean, really, guns and alcohol are a fine combination. Look people, we can hardly stop idiots from drinking and dialing and now we are expecting folks packing heat to resist the urge to demonstrate hubris and hotshotness?! It’s fucking absurd.

Allow me to share some North Carolina stats, courtesy of the Center for American Progress:

North Carolina experienced the 12th most aggravated assaults with a firearm per capita of the 50 states in 2011. One of these crimes occurred in the state, on average, every one and a half hours.

As of 2010, North Carolina had the 16th worst gun murder rate in the nation, almost 10 percent higher than the national average. Out of every 100,000 people, 3.9 are murdered with guns.

In the years 2001-2010, 11,102 people have been killed by guns in North Carolina. To put that in perspective, that is more than double the number of US combat deaths in the Iraq and Afghanistan wars combined.

In 2009, North Carolina’s “crime gun exports”—guns later recovered in crimes in other states that were originally sold in North Carolina—were exported from the state at a rate 34 percent above the national average.

The citizens are level headed; it’s the legislators who are not.

North Carolina residents overwhelmingly support universal background checks: Support for “requiring a background check for all individuals buying a gun” is at 93 percent, while only 6 percent oppose.

I can’t help but think my new slogan idea for the state of North Carolina will be a big hit. “WTF, NC?!“