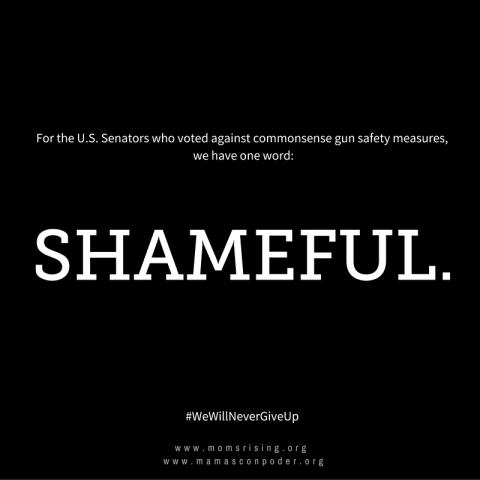 Kristin Rowe-Finkbeiner
Share This
Add your voice to the comments
Statement from Kristin Rowe-Finkbeiner, executive director and CEO of MomsRising.org, on the U.S. Senate’s failure today to pass common sense gun safety reform measures:
"It's easy to think about giving up in times like these. But we can't. The current situation is simply not okay. More than 20,000 children are injured or killed by guns each year, more  than 33,000 people are killed by guns each year, and just last week 49 people in #Orlando were gunned down in a LGBTQ+ safe space on Latino night by a mass shooter using a military-style assault weapon with a high capacity magazine that has no legitimate civilian use.
"Yet today the U.S. Senate voted down four gun safety measures, centered on expanding background checks for gun purchases which more than 90% of the public supports. The votes fell mostly along party lines with Republicans blocking progress. This is not okay.
"The tens of thousands of victims of gun violence deserve more than just the thoughts and prayers of members in Congress - they, and all the families in our nation, deserve common sense gun safety reform measures. It’s time to stop offering platitudes and to make meaningful change that will save lives.

"MomsRising members across the country will continue to work to make America safer by supporting gun safety measures, including background checks for gun purchases and a ban on the sale of military-style assault weapons and high capacity magazines.  The safety of our families, our friends, and our communities depend on it.”