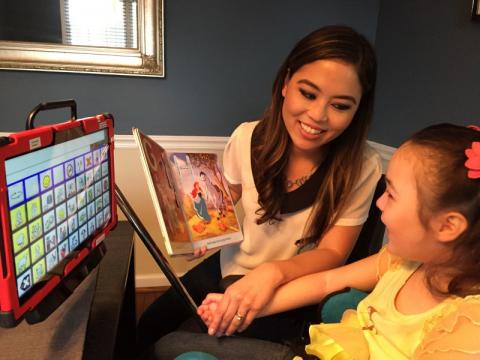 Say Ahhh!
Share This
Add your voice to the comments
My daughter Caroline is alive because of Medicaid. The medications, the equipment and the nursing care that have helped us manage her severe disability would not be possible without the federal program’s support. Now, with Congress and the White House considering cuts and restructuring for Medicaid, it’s important to consider children like Caroline.
We welcomed our little girl into the world seven years ago. We were in love the second we met her. She was sweet, bright, and observant from the very beginning.
Caroline’s early infancy was easy and uneventful, and she met most of the first year milestones on time. However, during a routine check-up around 10 months, Caroline’s pediatrician worried that she still wasn’t crawling and urged us to contact Early Intervention services.
Her evaluation determined that she had low muscle tone and needed physical therapy, and services began soon after her first birthday. Within a few months, it was clear that Caroline had the motivation to crawl and explore the world around her, but the coordination necessary to move forward was missing.
At 15 months, we noticed that Caroline was performing a strange repetitive movement with her hands. The movements were subtle at first, but my heart sank the first time I noticed them. This involuntary behavior was a sign that we were dealing with more than just gross motor skills delays. We immediately took Caroline to see her pediatrician, who expressed concerns about the possibility of Rett Syndrome.
We were stunned when we first read about the progression of the disorder. We were referred to a neurologist and a geneticist in the hopes that we could rule it out.  However, the hand movements soon became constant and Caroline began to lose the ability to use her hands to play with her toys, feed herself, and hug us. Around this time, we noticed that she was losing her words and struggling to vocalize sounds. She was verbal early on, and communication had always been her strength, which made her regression all the more noticeable. Caroline also developed problems with chewing and swallowing.
We experienced dark days filled with grief and anxiety as we watched Caroline struggle with the loss of these skills. At 17 months, doctors told us she had Rett Syndrome, a heart-breaking diagnosis that finally explained her inability to walk, talk, or use her hands. We were devastated.
Rett Syndrome prevents Caroline from expressing herself and moving the way she wants to, making her completely dependent on others for every aspect of her life. At age 7, she still wears diapers and can only eat pureed foods and drink out of baby bottles. The disorder, however, doesn’t affect Caroline’s intelligence or her ability to love.
She is very observant and engaged, and she understands everything we say to her. She uses her eyes and makes sounds to communicate, and she is also learning to tell us what she wants with a computer that tracks her eye movements. Caroline is not defined by her missed milestones, but by her strength and sweet spirit. She loves spending time with her family and friends. She is daddy’s little girl. She loves books about dinosaurs, and her favorite movies are Tangled and Beauty and the Beast. In a lot of ways, she’s just like any other girl her age.
But unlike typical girls, Caroline’s medical needs continue to worsen and grow more complex with time. Even with four medications to control her seizures, they keep coming. Caroline had 85 seizures last year alone. She also needs medication to keep her from vomiting and medication to let her know when it’s time to sleep. Caroline’s muscles and tendons are often very tight so she has to take yet another medication and wear braces on her ankles and hands to keep contractures from developing. Caroline’s condition also makes her susceptible to pneumonia and respiratory failure.
Caroline has been in the Pediatric Intensive Care Unit (PICU) five times since 2014, sometimes for several weeks straight. One visit in 2015 was particularly terrifying and heart wrenching because we weren’t sure we would get to bring her home again. Luckily, her great team of doctors worked hard to save her life and figure out a plan going forward. To reduce the number of expensive hospitalizations and also prolong the quality and length of her life, Caroline’s doctors put her on a daily regimen of lung therapies at home.
Several times a day, she receives a round of various nebulizer treatments, followed by therapies to keep her airways clear and help her cough. These lung therapies are administered through two different types of hospital-grade medical equipment. At night, Caroline also receives additional oxygen support through a BiPap respiratory machine that helps her inhale and exhale properly.

Caroline is alive because of Medicaid. Medicaid has also allowed my husband and me to care for her in our home and watch her grow into the beautiful, sassy, and funny girl she’s becoming.

We found out about Virginia Medicaid’s Elderly and Disabled Consumer Directed (EDCD) waiver six months after Caroline’s diagnosis when our circumstances started taking a toll on our mental and physical health. We were heartbroken, sleep deprived, and extremely stressed. My husband and I were working full-time while doing our best to ensure that Caroline saw all of her doctors and therapists each month. We hadn’t yet found a solution to address Caroline’s inability to sleep so we were functioning on just a handful of hours of sleep each night. We also spent every free moment educating ourselves on how to best care for our daughter and navigate this new uncertain path.
When I shared our concerns with Caroline’s case manager from our local Early Intervention services, she told us about the EDCD waiver, which would provide us with some hours of personal assistance and respite care each month. We were initially reluctant to enroll in this benefit, but we recognized that the pace and complexity of our lives was not sustainable, and we desperately needed help.
The EDCD Medicaid waiver allows elderly and disabled people to live in their homes instead of an institution. Caroline receives nursing care for a few hours each day on weekdays (and sometimes on weekends), allowing my husband and me to work and take care of our family needs. We never imagined that these nursing services would one day save Caroline’s life.
In 2014, during one of the monthly required visits as part of the program, the agency’s head nurse took Caroline’s vitals as usual and noticed something that alarmed her. Caroline, asleep during this routine check-up, wasn’t taking enough breaths per minute. The nurse instructed us to get prescription for a Pulse Ox machine and see a sleep specialist as soon as possible. These two actions changed the course of our lives. Caroline’s sleep specialist and pulmonologist ran tests that revealed she had severe sleep apnea. Apparently, Caroline often stopped breathing throughout the night, and she wasn’t fully inhaling and exhaling which caused her system to retain higher than normal levels of carbon dioxide.
A few months later, the Pulse Ox machine’s alarm suddenly went off after Caroline had been asleep for a while. We ran to her room and noticed that her breathing was labored and her oxygen saturation was dipping. During the day, we had observed symptoms of what appeared to be a mild cold and never imagined that she was rapidly developing pneumonia. We rushed her to the hospital where she was immediately admitted to the PICU and ended up staying for 17 days.
The EDCD waiver also helps cover the rental of the lung therapy machines and other medicines that are not covered by our private insurance. The rental of Caroline’s two lung therapy machines alone amounts to several thousand dollars a month. These machines not only keep Caroline out of the hospital but also allow her to do something most of us take for granted – to breathe normally…and stay alive.
The uncertainty about Medicaid’s future has compelled me to speak out on her behalf and on behalf of the millions of children like her who rely upon a strong Medicaid program.
Since its creation more than 50 years ago, Medicaid has been a successful, cost-effective federal-state partnership. Several proposals have recently surfaced that would impose an arbitrary cap on the federal Medicaid contribution and shift more costs to states. These proposals would severely hamper state leaders’ ability to respond to the fluctuating needs of their residents and pose a real threat to families who rely on Medicaid now or may need it in the future.

Our family story is not unique. Babies are born every day to parents who never expected to need Medicaid to help them meet their children’s needs.

Nobody knows what the future holds. None of us knows whether we or one of our loved ones will face insurmountable medical costs due to an accident, illness or the birth of a child with special health care needs. The decisions our leaders make today about the future of Medicaid will have a dramatic impact on the future of our children and families. Strengthening Medicaid would build a brighter future for our children, but proposals to weaken the program through arbitrary caps would leave families wondering whether or not Medicaid will be there for them in their time of need.
Marta Conner lives in Virginia with her daughter and husband.
This story originally appeared on Say Ahhh!