Marching for My Mother

Picture yourself as a young woman, born and raised in Thailand, and the only language you know is Thai.  You have a job at a bank, and the money you make goes to your large family.  Every Sunday, you go to the wat (temple), and pray for a better life for your family. You fall in love with a man in Bangkok; he wants to pursue an American dream. You've never even left town, but now he is asking you to go to the other side of the globe – a place you’ve only seen on television. You pack your whole life into two suitcases and move to Chicago.

You never had much money, but the apartment you move into is too small, even for you. You're scared, not because of the apartment, but because of the long periods of quiet. While your husband is out laboring for low wages, you sit at home and read a book. You get so bored, you decide to visit the local fast food joint. You walk up to the cashier and speak the words you know, but you don't know enough. The young cashier gets impatient. He knows you don't speak English, but yells English words at you anyway; he seems to think that the louder he yells, the more you'll understand. People stare at you. You're scared again and would give anything to be back in that small, quiet apartment now. You don't know what to do, so you rush away without meeting anyone’s eye. Back in your apartment, you fall into bed and cry.

It is years before you meet another Thai person, but eventually, at another wat, you meet more who eat the same food as you, speak the same language as you, and speak fondly of the mother country as you would. They even laugh like you. You feel safe. But whenever you venture outside that space, people call you names like "chink" and "gook."

But you put up with it, because you feel you're children will succeed here. You know your English-speaking children will translate for you. You hope they will get good grades in school and get good jobs. You teach them to work hard so they don't have to struggle like you did. You know they will be happier here than in Thailand, and that makes you happy.

This story was about my mother, the most courageous person in my life.

Ignorant people still treat my mom like she doesn’t belong in this country. Somehow Asian Americans as a collective are still too often regarded as foreigners. We live in a nation largely of immigrants, yet we’re treating immigrants as less than human. Something about that seems so un-American…

I turn on the television and see Arizona Governor Jan Brewer talking about how she won’t tolerate racial profiling, just minutes after signing a law that does just that. The camera pans the crowd outside of largely Latinos rallying but the problem affects everyone.

When speaking about immigration, the mental pictures generated are not usually of Asian Americans.  There's also a strong stereotype out there that we are quiet. Apparently we're good at math, but we don't talk much. But Asian Americans can and do defy prejudice. This Saturday, it’s time for May Day again in Chicago, in LA, in DC, in America. It’s that time of year, where we march for immigration reform and we march for the DREAM Act.

May Day happens every year, but this year it’s more important than ever in light of what has happened in Arizona. In light of the broken promises by our President and legislators. In light of the people who are constantly being detained and deported on a daily basis. In light of that “quiet Asian” stereotype. I hate that stereotype. In some Eastern cultures, being loud can sometimes be viewed as being disrespectful. In America, to be heard, we have no choice but to be loud and make noise. This Saturday, May 1st, 2010, let’s march for immigration reform. Let’s make noise.

Visit the NAKASEC website to join an event in DC, in LA or in Chicago.

We need the power from our communities! 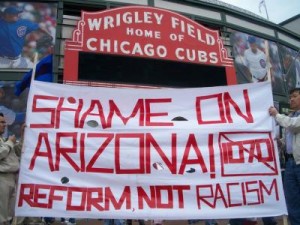