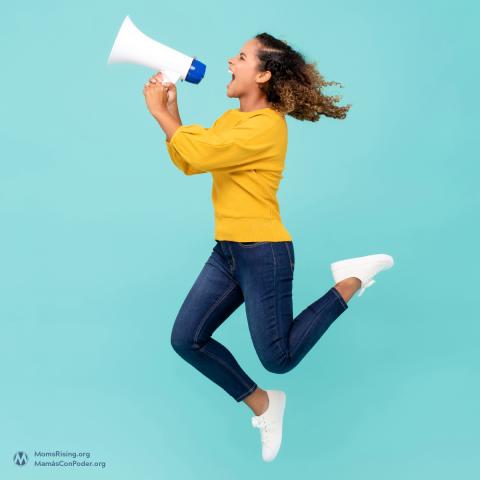 Mad at Manchin? Turn your anger to action

I’m coming to you with my heart on my sleeve. My name is Amy Jo and I’m a West Virginia mom who has been organizing mommas and families in the “almost heaven” state for years. [1] And families in my state, and across our nation, need your voice in this fight right now.

West Virginia Senator, Joe Manchin, announced this morning that he will not support the current version of the Build Back Better Act. [2]

This is a stinging heartbreaking, disappointment to families in his state who have been coming to him for the last year urging him to vote yes on universal preschool, affordable child care, paid family medical leave, the child tax credit, lower prescription drug prices, and more; changes that would to help West Virginia families and businesses, as well as those across the nation.

And we are FIRED UP:

“When I heard the news my heart sank to my stomach. I got nauseous and immediately stressed out about how I’m gonna pay all my utilities, car payment, insurance, and feed my family next month…Literally two weeks from now. How dare he stand there and act like he’s working in the best interests of West Virginians when we are yelling and screaming at the top of our lungs for him to listen and pay attention. I’m furious.” — Amber of St. Albans, West Virginia

Today, Senator Joe Manchin betrayed his commitment to represent moms and families in his state like Amber. And we know this is a betrayal for families like yours across the nation, too.

Get fired up with us and tell Senator Manchin we expect him to come back to the negotiating table — and feel free to also share what his “no” vote would mean for your family and why our families need him to change his vote to a YES.

This isn’t the end. If moms know how to do anything, it's how to fight hard for our kids' futures and we KNOW our kids’ futures are on the line.

In West Virginia, we know all too well that Manchin isn’t the only Senator who is opposing transformational solutions for families. Republicans in Congress are so determined to prevent what might be perceived as a Democratic accomplishment that they are often voting against the urgent needs of their states. This isn’t a party issue but a moral one.

We don't need Senator Manchin to come "home and explain [Build Back Better] to the people of West Virginia." What we need for him to do is to listen to what he's been told by West Virginia mommas who have been explaining to him and his team what this bill would mean to their families and businesses all year.

Senator Joe Manchin: Moms and their families deserve nothing less than a YES vote on Build Back Better from you. Period.

While lawmakers point fingers and Senator Manchin makes news appearances, families across the nation are preparing for a hard year ahead with no more expanded Child Tax Credit payments at the same time that many of them will have to start paying student loans again when money is already tight. It’s time to find a way to make progress for America’s moms and families. We know that is possible because we’ve seen Congress do it with the American Rescue Plan and the Bi-partisan Infrastructure bill.

Not to mention that the Build Back Better Act will help families cope with inflation by lowering their child care and other costs. It is a job-creator that will provide millions of good jobs for women after the Bi-partisan Infrastructure bill created jobs in mostly male-dominated sectors. [3]

How many more times will moms be forced to sacrifice everything, from their jobs, their income, and their very last bit of patience until Senators like Joe Manchin (and every Republican member of Congress) decide to vote YES with families instead of siding with corporate interests?

CLICK here and take action to let Senator Manchin know to do what is right for families in his state and change his vote to a YES.

Together, we can make sure moms and families aren’t left behind.

Thank you for raising your voice with us mommas in West Virginia and for all you do,

[3] If the Senate wants to address inflation, it should pass Build Back Better

Take Action!
Moms to Senator Manchin: Get back to the negotiating table - NOW!