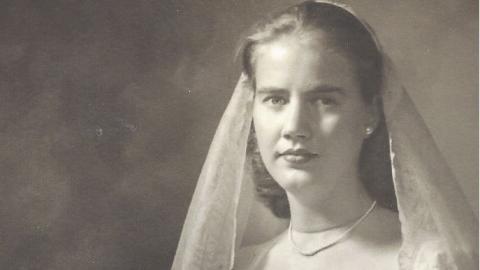 When Lucy Durr married Sheldon Hackney in 1957, the custom alterations to her beautiful gown were done for her by a family friend–Mrs. Rosa Parks. This wonderful detail opens a small window into my dear friend and former Children’s Defense Fund board and volunteer staff member Lucy Durr Hackney’s extraordinary life. Lucy, who passed away last October at age 81, was the daughter of civil rights activists Virginia and Clifford Durr and niece of U.S. Supreme Court Justice Hugo Black. She followed her family’s staunch commitment to social justice and led a selfless life of loving service and support to family, friends, just causes, community and nation.

By the time Lucy got married her parents were well known for their work with progressive causes and local support of civil rights activists and leaders in Montgomery, Alabama. Clifford Durr was an attorney who had worked in President Franklin Roosevelt’s administration and defended citizens accused of communism during the McCarthy era. Virginia Durr was friends with Eleanor Roosevelt and one of the founding members of the Southern Conference for Human Welfare (SCHW), an interracial group working to reduce segregation and improve living conditions in the South. Virginia Durr and Mrs. Parks were part of an interracial women’s group in Montgomery and Mrs. Durr had helped arrange a scholarship for Mrs. Parks to attend Highlander Folk School for training in nonviolent action in the summer of 1955. When Mrs. Parks was arrested four months later, Clifford Durr helped bail her out of jail and Virginia Durr drove her home. During the tumultuous months that followed, Clifford Durr was one of Mrs. Parks’s attorneys and Virginia Durr strongly supported the Montgomery Bus Boycott and the network of White women who helped drive Black women to work who stayed away from riding the buses.

Lucy left the segregated South for Radcliffe College in Massachusetts but returned to Alabama to marry Sheldon, another Alabama native who shared the same commitment to civil rights and social justice. Their marvelous partnership lasted the rest of their lives. As Sheldon, a Southern historian, went on to become a university leader, Lucy continued her education while raising their three children–completing her undergraduate degree at Princeton University where Sheldon served as provost and earning her law degree at Tulane University while Sheldon served as president. She rose early and went to bed late to get her multiple responsibilities done.

When Sheldon became President of the University of Pennsylvania, Lucy began working as a staff attorney at the Juvenile Law Center where her family notes she was “tenacious” in her work on behalf of children’s health, welfare, and justice programs, and founded Pennsylvania Partnerships for Children, a nonprofit advocacy group dedicated to improving the health, well-being and education of Pennsylvania children that helped 100,000 previously uninsured young people in Pennsylvania receive health coverage. Lucy and Sheldon’s oldest daughter Virginia suffered a brain injury at birth which fed Lucy’s passion for helping children, especially those with disabilities and other special needs, and making sure all children got the education and support they needed to transition to successful adult lives. She called Virginia her “muse,” and Virginia, son Fain, daughter Elizabeth, and eventually Lucy’s beloved grandchildren were her inspiration in all she did as a fierce child advocate.

Lucy was a board member at the Children’s Defense Fund alongside Hillary Rodham Clinton as well as serving as a volunteer CDF staff member when she spent several years in Washington, D.C. when Sheldon served as Chairman for the National Endowment for the Humanities in the Clinton administration. What a joy and privilege it was to know and work with her over the decades. She was beautiful inside and out and brought light wherever she went. Her family writes: “Lucy was the rock of her immediate and extended family. She was vibrant and full of energy. She was unrelentingly optimistic. ‘There will be no woe is me!’ was a favorite saying. She offered a smile and a greeting to all those she encountered. She was an amazing mother and grandmother. She could be counted on 100% by her family whenever she was needed. She would defend any family member even when they were wrong. Unconditional love is hard to find–and she gave it to her family in full measure.” Lucy Durr Hackney continued her parents’ legacy to its fullest throughout her committed life of service and child advocacy. We are all beneficiaries–especially children–and I feel so lucky she was my friend.