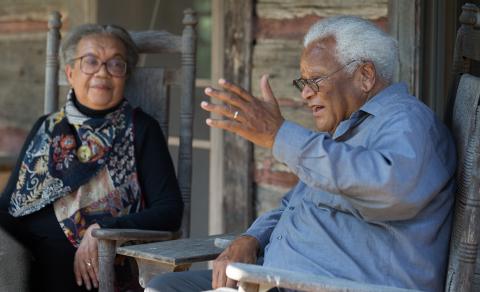 “The way through chaos, calamity, and confusion is not by adding chaos, calamity, and confusion. That multiplies what’s hurting us and undermining us. The Hebrew and Christian Bibles insist from the first chapter to the last chapter you cannot overcome evil with evil, you have to overcome evil with good. Depart from evil, do not be overcome by evil. An eye for an eye leaves everyone blind. A tooth for a tooth means that therefore soon everyone is toothless. You cannot bind up the wounds of people in our land by pouring sand into the wounds.”

“You cannot change wrong with wrong.”

This past week the Children’s Defense Fund (CDF) was blessed with a visit from one of the greatest nonviolence practitioners in our nation and world, Rev. James Lawson. He shared lessons in leadership with CDF staff from our greatest American prophet, Dr. Martin Luther King, Jr., who called Rev. Lawson “the leading theorist and strategist of nonviolence in the world.” In some of the recent elections Americans once again reaffirmed their desperate hope for positive, principled leadership in times of chaos, calamity, and confusion. Rev. Lawson has long been an example of exactly this kind of leadership.

Rev. Lawson has been for me and countless others a peerless teacher, role model, and leader of nonviolent direct action. He guided Dr. King and thousands of young leaders of all races and ages seeking racial and economic justice. He is our living embodiment of effective social change and exemplifies and taught us Christ’s and Gandhi’s nonviolent values and strategies to combat our nation’s recurring birth defects of slavery, Native American genocide, exclusion of women and non-propertied White men from our political and economic processes. And for 90 years he has been a singular and unwavering voice calling across generations for a nation and world where every child of God is welcomed, respected and empowered to realize their God-given potential.

Rev. Lawson is the son and grandson of Methodist ministers and received his own ministry license during his senior year of high school. He was educated at Ohio’s Baldwin-Wallace College, Oberlin College and Vanderbilt Divinity School, but he was also schooled by the 13 months he served in federal prison after being arrested for refusing to enter the military when drafted—or in his words, refusing to “put on somebody’s military uniform for the purpose of using arms against other human beings.” It was in prison that he reread the writings of Gandhi and theologian Howard Thurman. Afterwards he spent three years as a Methodist missionary in India, where he first read about Dr. King and the Montgomery Bus Boycott—a milestone in the movement brewing at home in the United States that he would help lead.

Rev. Lawson and Dr. King met in person in 1957 after Rev. Lawson returned to the U.S. and was studying at Oberlin’s Graduate School of Theology. Dr. King urged him to come south to join the Civil Rights Movement, arguing that there was no other clergyperson with his experience and knowledge of nonviolence. Rev. Lawson replied that he had been thinking about it and would come as soon as his studies were complete, but Dr. King convinced him to come immediately. In January of 1958 Rev. Lawson moved to Nashville to nurture, challenge and prepare the students of the Nashville movement, producing some of the great leaders of the national Civil Rights Movement including Congressman John Lewis. Rev. Lawson served as Director of Nonviolent Education for the Southern Christian Leadership Conference (SCLC). Rep. John Lewis later wrote: “Jim Lawson knew…that we were being trained for a war unlike any this nation had seen up to that time, a nonviolent struggle that would force this country to face its conscience. Lawson was arming us, preparing us, planting in us a sense of rightness and righteousness.”

He has never stopped doing that and our nation has never stopped needing him and benefiting from his unwavering nonviolent moral voice. Rev. Lawson continues to mentor and prepare communities for nonviolent struggle and direct action organizing. Movements start from the bottom up not from the top down and as Rev. Lawson said at CDF this week, “There is no substitute for the community struggle.” He has been part of the movements for racial justice, reproductive choice, a living wage, the rights of hotel and other service industry workers, undocumented immigrants and those who are gay, lesbian, bisexual, and transgender. He has worked across our nation with students, including the Dreamers who pushed for the DREAM Act to grant legal status to immigrant children. And he is a role model for me and generations of younger servant leaders as he continues to teach and preach and inspire at CDF’s Haley Farm, our training ground for servant leaders.

At another CDF meeting Rev. Lawson quoted this old beloved prayer: “Grant by Thy grace that we may not be found wanting in the hour of crisis when the battle is set. May we know on which side we ought to be. And when the day goes hard and cowards steal from the field and heroes fall around the standard, may our place be found where the fight is fiercest. If we faint, may we not be faithless. If we falter, may we not fall. And when we fall, may it be while loving you and our neighbors and facing the foes.” It remains a benediction for our times and for his remarkable life. I am so grateful for Jim Lawson’s example, stamina, extraordinary intellect and generosity of spirit to so many and am so glad to have him as friend, mentor and teacher. He has been God’s unwavering messenger of hope and justice for all of God’s children.