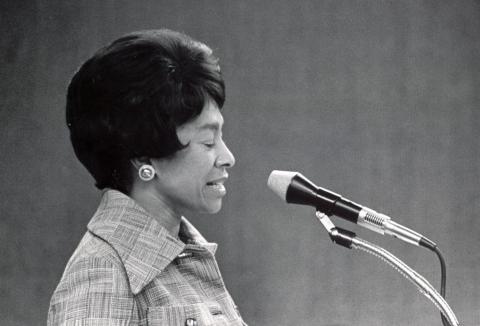 “Someone had to break the pattern, and very often the civil rights revolution was initiated by the most vulnerable Black persons. Many of them were women and many of them were children—tough, resilient, hopeful, beautiful children. The greatest experience of my life was standing with them as they took the risks.”

These words from Jean Fairfax were highlighted in the recent remembrance by the NAACP Legal Defense Fund (LDF) for their beloved colleague, who passed away in February at age 98. Jean was the founder and director of LDF’s Division of Legal Information and Community Services and served at LDF for twenty years before retiring in 1984. In that role she made a quiet but profound difference. As LDF explained: “Over the course of her 40-year career, Jean Fairfax was a pioneering organizer, a professor, a religious scholar, a missionary, and an unparalleled strategist and policy advocate. She helped organize Black students and families in rural communities in the years following Brown v. Board of Education, and went on to shape and lead some of the most influential federal government policy innovations to support working class and poor families.”

Later she and her sister Betty, a teacher, became philanthropic leaders and role models as they used their carefully invested savings to endow more than a million dollars in scholarships for poor students and students of color. Along the way she was a collaborator, friend, and inspiration to many of us at the Children’s Defense Fund. As Black History Month has come to an end, Jean Fairfax’s example reminds us we can’t confine the importance of Black history to a single month. And as Women’s History Month begins she is a special example of the legions of women—too often unsung—who have always been at the backbone of every transforming social movement in America.

Jean was raised in Cleveland, Ohio. Her parents were both the first generation in their families born into freedom and the first to go to college, and Jean grew up valuing education and service to her community. After graduating Phi Beta Kappa from the University of Michigan she earned a joint degree in comparative religion from Union Theological Seminary and Columbia University and served as a university administrator before traveling to Austria as a missionary. She then became a Director of the American Friends Service Committee—first working with colleges and then becoming their Director of Southern Civil Rights. That work in the South at the height of the Civil Rights Movement led her to her role at LDF.

At LDF she helped determine strategy and researched and wrote key reports. One of her early projects there was a collaboration between LDF and the Washington Research Project, CDF’s parent organization. That 1969 report, Title I: Is It Helping Poor Children?, exposed widespread illegal diversion of federal funds in Title I of the Elementary and Secondary Education Act intended to provide financial assistance to local educational agencies serving areas with concentrations of educationally disadvantaged children from low-income families across the South. Winifred Green, who later founded the Southern Coalition for Educational Equity and was a longtime CDF board member, partnered with her on that report. Jean continued to work with Winifred Green and Oleta Garrett Fitzgerald, now CDF’s Southern Regional Director, at the Southern Coalition on Educational Equity. Her legacy and influence lives on through the Southern Rural Black Women’s Initiative for Economic and Social Justice organized across the Deep South by Winifred, Oleta, and Sophia Bracy Harris, founding executive director of the Federation of Child Care Centers of Alabama.

Jean held fast to her priorities throughout her extraordinarily dedicated life. LDF’s current President and Director-Counsel Sherrilyn Ifill said: “Jean’s guiding principle was her deep and sincere devotion to and respect for poor and working-class families. She listened. She learned about the needs of parents and children and the barriers they faced, and then she fought for policies that would bring to those families the resources they needed to move their lives forward. She was a master strategist. Ms. Fairfax understood how racism worked to depress opportunities for Black families, and she was clear-eyed about the need to focus on the system of policies and practices—especially funding policies—that could be transformed to create a level playing field for those most in need.”

One of Jean’s most influential legacies was her successful effort leading the Committee on School Lunch Participation, a coalition of women’s organizations, which in April 1968 released Their Daily Bread, a study of the National School Lunch Program. The report helped prompt Congress to establish the Special Food Service Program for Children, which became the Child Care Food Service Program and the Summer Food Service Program. After the CBS broadcast of the documentary “Hunger in America” and continuing pressure from Dr. Martin Luther King Jr.’s Poor People’s Campaign and others, the Committee’s work persuaded President Nixon to increase funding for the National School Lunch Program serving children in areas of concentrated poverty.

Jean was a firm but gentle leader. CDF colleagues shared that if you arrived to a meeting with Jean 10 minutes early, you might still be late! Jean’s attention to precision and excellence was a hallmark of everything she did, but she was always welcoming, inclusive, and gracious. Sophia Bracy Harris remembered Jean visiting her family when Sophia and her sister were integrating their high school in Elmore County, Alabama, soon after a firebombing of their home: “My mother spoke of having visited with royalty when Jean and Winifred visited us at our newly rebuilt house; Mom wearing her ragged field clothes, and Jean wearing a dress fit for a queen. But Jean treated Mom as if she was a queen.”

Jean Fairfax set a high standard. We all can honor her legacy by following her example and carrying on her good work to help end child poverty and the hunger and lack of a quality education that so often accompany it.