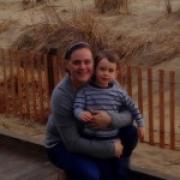 Andrea Filkins
Share This
Add your voice to the comments

Hi!  I’m a young mom from Virginia and I’m taking a stand against gun violence.  I don’t have a personal experience, but I do have a 2 year old with a speech delay that attends an elementary school full time for that reason, so Newtown really hit hard on a relatable level.  For a while I was fighting to avoid another Newtown, not paying enough attention to the daily, invisible slaughter.  Then I started to read some of the articles for the less publicized daily gun deaths.  First I was shocked, then devastated, and then I decided that that wasn’t going to do anybody any good and now I am determined to bring about change.  Here’s why:

On March 1, Derrick King (31) was shot & killed in Alabama by a convicted murderer and Sonia Courtney (58) was shot by her husband twice in the back piercing her lung and spine while in their Georgia home.

On March 2, Toni Voss (27) was mistaken for an intruder and shot by her boyfriend in Wisconsin. And Helen Thomas (31) was shot by her husband, who kept shooting at her, even after she fell to the ground in Texas.  Then he shot himself.  They had a small child together, who is now with relatives.  There also was Sgt. James Fleming (36) who was shot by a juvenile in his Colorado home.  My heart broke for little Michael Easter (4) who accidentally shot himself with his father’s gun in Michigan and the Freitas family (40, 69 & 70) that was slaughtered in Wyoming.

On March 3, Shawn Stoddard-Nunez (19) was killed as an unintended victim when the driver of the car he was in turned a traffic stop into an attack on a police officer in California.  That day James Key (50) and Eric DeBruce (42) died in Georgia, when a gunman opened fire with a semi-automatic rifle and fired more than 30 rounds injuring two more victims and piercing the homes of neighbors.  Nils Vickstrom (19) died when a Michigan homeowner sentenced him to death for lingering outside of his business.

On March 4, Millicent Morros (48) was shot by her ex-boyfriend in Indiana, before he took his own life.  Her older sister was killed a couple years before by gun violence as well.  Joel White (44) was shot the same day over a pool game in Missouri and another player was stabbed.  The stabbed victim survived.  Santiago Cicneros III (32) decided to end his life via “suicide by cop”, a term I first had to learn about, but was very familiar with once I finished reading the March gun deaths.  He was a PTSD veteran and followed two police officers into a garage where they used to write reports and then opened fire.  You can listen to the audio from the Oregon shooting here.

On March 5, Nicole Haynes (32) and her teen daughter were shot by her ex-boyfriend in Missouri.  Her daughter survived. The ex-boyfriend was later shot by police as he pointed a gun at them.  The same day Jesus and Rosa Contreras (70 & 63) were slain by their estranged son-in-law in Texas and Irvin Ordoñez (21) committed suicide instead of facing charges for aggravated battery with a deadly weapon.  He should have faced the full force of our justice system.

On March 6, Cassandra Owens (21) was shot by her boyfriend in Kentucky.  They had a young child together, which is now with family.  Brandon Kuiper (16) accidentally shot himself playing Russian roulette at a party in Michigan.  Leigh (42) and Sharlea (11) King were killed by Leigh’s son in Michigan as well.

On March 7, a man opened fire on his girlfriend inside a restaurant in Arizona.  You can watch video of people fleeing from the restaurant here.  Another woman was shot during the sleighing, but she survived.  If you’re feeling nauseous you might want to stop here, because it’s going to get a whole lot worse.  Lauren Trotty (25) and India Coleman (20) were executed along with another person in front of their children (1 and 5 years old).  The kids were left alone with the bodies for hours until help arrived in their Michigan home.  Four more people were shot in Mississippi over a dice game, two died.  Donovan Batterson (21), a paratrooper at Fort Bragg committed suicide on base in North Carolina and Master Trooper Junius A. Walker (63) was shot in the line of duty during a traffic stop in Virginia.

On March 8, police followed up on a domestic call in California.  They found a man shot to death inside a truck.  Then they heard screams coming from a house.  They went over to investigate when the suspect fired at the officers.  A SWAT team was called in, and a standoff lasted for several hours. At one point, two children, an 8-year-old boy and a 3-year-old girl, ran out of the house and told police that their parents were dead.  A 1-year-old boy was also found inside the home unharmed. All three children are expected to be OK (in a physical sense I’m assuming) and are in protective custody.   Demetrius Harper (32) and Erick Felton (23) were killed in a shooting that erupted in an illegally operated night club in Minnesota, one more person was shot, but survived.

On March 9, Amanda Himes (39) was executed by her husband with multiple gun shots and puncture wounds while their kids were in the home in Pennsylvania.  He then took his own life.  Genesis Fonseca (17) was shot by her boyfriend who had a string of arrests last year on charges ranging from robbery, resisting arrest, battery on the elderly and trespassing after warnings in Florida.

On March 10, Stefon Boyer (27) lost his life in New Jersey outside a bar, two more people were shot, but are expected to survive.  Harold Davis jr. (23) was shot when his ex-girlfriend accidentally encountered him at a parking lot in Florida.  Christina (42) and Vanessa Wilson (14) died inside their Arizona home when they were shot by the mothers’ boyfriend who later committed suicide.  Luis Martinez (51) was shot by his landlord for being behind on rent.  The landlord also tried to shoot Ana Rodriguez, a relative of Martinez, but the gun jammed.  Rodriguez’s 10-year-old son, Elian Espinal, jumped out the window to escape the rampaging landlord.  The landlord got on top of Rodriguez and was choking her when her brave 12-year-old daughter, Eliana, hit him with a two-by-four piece of wood.  He was taken into custody and is charged with murder.  In Ohio, James Gilkerson (42) was pulled over for a traffic stop and attacked police with an AK-47.  He was eventually shot by police.  There you go - another suicide by cop.

And those are only a few select stories from the first 10 days of March.  There were so many more heart-wrenching stories like the one of Antonio Santiago (1), Michael Ayers (2) and Nazario Boykins (2).  That’s why I’m putting all my time and effort into this cause.  THIS needs to stop.