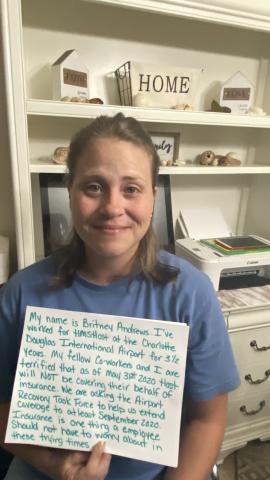 I Fasted To Support Workers. Here's What Happened 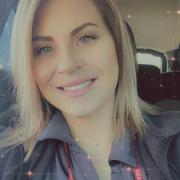 Britney Andrews
Share This
Add your voice to the comments

“It’s always the right time to do the right thing.” – My union leader, William Voltz, always says that MLK Quote.

My name is Britney Andrews. I am a union shop steward with UNITE HERE, Local 23 in Charlotte, NC. Before the coronavirus forced me out-of-work, I had been a bartender at Philips Famous Seafood at CLT Airport in Charlotte, NC for 3 years.

On Aug. 11, 2020, my union, ally organizations and I helped organize a food drive in front of Senator Tillis’ office in Charlotte, NC as part of the nationwide action to call on Senators to extend the $600 for unemployment insurance. Also, I was one of the 6,000 people fasting that day as part of the Virtual #FastAction.

While that day was a long and rough one, it was transformative. I am inspired that over 6,000 fasters participated in the virtual fast. The whole day action really made me think about what my own neighbors may be going through and not knowing about.  It opened my eyes to a bigger picture. If I could do that action every week, I would. I felt like I was making a difference, even though I’m just one person.

We gave out food and gift cards in front of Senator Tillis’ office to demonstrate the need that is in the community. And to remind Senator Tillis that “It’s always the right time to do the right thing.” The people we gave food to said, “Thank you” and “it’s greatly appreciated.” In fact, at one point a public transit bus that came by, the driver asked what we were doing, and a passenger took a bag of food.  The need in Charlotte, North Carolina and the United States is real. The news doesn’t steer us to see the real problems in the world.

I’ve fasted for doctor’s appointments before but hadn’t had to do it for a whole day. Just fasting for a 24-hour period I felt like my own stomach was eating itself, it was a horrible feeling. I can’t imagine how children or any human being goes without food for one day, much less multiple days. You just never know what someone is going through until you’ve gone through it. I can’t imagine what it would be like to have my own child sitting there and I’m not able to feed them. I would feel less of a parent.

My children didn’t quite understand that I was fasting. I have two 5 yr olds, a 12 yr old and a 14 yr old.  My husband and my mom were really supportive about the fast and the action. In fact, my mom is one of those people who will purchase more than she needs to give them to people who are in need. Before the pandemic and being furloughed from the airport, I was able to donate school supplies for kids who may not been able to get them. Now the shoe is on the other foot and I’m the parent struggling just to make sure that I can get everything on the school supplies list.

HMS Host, the company I work for, has notified me and my coworkers that we will be permanently laid off if we are not recalled back to work by October 15th . My health insurance has already been cut off for months now. It feels like HMS Host is only interested in what their workers can do for them and do for them now, and that if you can’t do anything for them now they don’t need you.

It's not my fault that this happened. It’s not the government’s fault that this happened, but this is why we have a government to take care of the American people when unforeseeable things happen. The community needs to come together. I’m talking about the union, my neighbors, your neighbors, EVERYONE!!! Speaking up together so that our voice can be heard. Why does it have to be Republican? Why does it have to be Democrat? Why does it have to be about politics? The United States of America starts with UNITED; we need to come together united and stand for what’s right!! It shouldn’t be about money and dividing people.

Thank you to all the people who participated in the fast, all the people who have been calling into their Senators, and all those taking action. I wish Senator Tillis would have a conversation with one of us. He would get a feel for what one individual person along with thousands are going through in his state, and what obstacles they’ve faced that they may have not been able to overcome.  But he hasn’t answered our calls, emails or questions, much less even try to resolve them.

While this current moment is hard, and more trying times will come. I am glad to be part of our union and to have so many people taking action with me. I don’t think I would have the perspective I do now, if I hadn’t met William and joined the union. I’m not giving up on keeping my job and I’m not giving up on this fight. I just want the Senators to know, “It’s always the right time to do the right thing.”