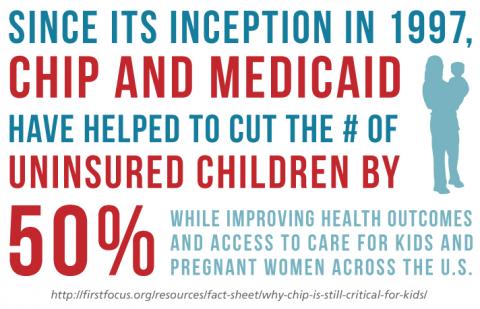 Have Questions About CHIP? We Have Answers!

The Children’s Health Insurance Program (CHIP), which insures almost nine million children nationwide, expired on September 30th. Congress continues to delay in reauthorizing this historically bipartisan legislation. Do you have lingering questions about CHIP? Are you unsure about why it should be reauthorized? MomsRising recently hosted a #WellnessWed tweetchat on CHIP with the Georgetown Center for Children and Families and the American Academy of Pediatrics. If you were unable to join the tweetchat, no worries! Below is a recap of the discussion and all the important questions covered.

Q1: What is CHIP? When was it started?

CHIP is the Children’s Health Insurance Program which began in 1997. It has a history of being bipartisan legislation and it insures nearly nine million children. Since 2009, CHIP has provided dental coverage. CHIP is a federal program that is run by states, you can learn more about how CHIP works in each state by checking out these snapshots.

Q2: Who does CHIP serve?

CHIP serves more than 1 in 8 kids nationwide, and it serves pregnant women in 18 states. It specifically serves children in families that make too much money to qualify for Medicaid but make too little money to be able to afford private health insurance.

Q3: How has CHIP worked with Medicaid and the Affordable Care Act (ACA) to bring the uninsured rate for kids to an all-time low?

Together, CHIP, Medicaid, and the ACA insure 95% of all children in the United States.

Q4: It sounds like CHIP has been a bipartisan success. Why did Congress allow its funding to expire on September 30th, 2017?

Many in Congress seem to think states will be fine well past the September expiration, but states are already taking actions as they anticipate they will soon exhaust their funding. Some states have already started sending out letters to families that rely on CHIP, telling them funding will soon run out.

Q5: What is happening with CHIP in Congress right now?

The House passed a CHIP bill, but the Senate has yet to act. There is disagreement on how to offset costs. The House and Senate agree on reauthorizing CHIP, but not on how to pay for it. CHIP is less than one-half of 1% of the budget. Kids can’t wait!

Q6: What are the consequences of Congress not extending CHIP on the September 30th, 2017?

Every day that Congress fails to reauthorize CHIP. the future health of nine million children is in danger. This uncertainty places unnecessary stress on low-income families and on states! States are scrambling to figure out how what to do as they will soon run out of CHIP funding. Read more about the consequences of delay HERE.

Q7: How are states responding to the uncertainty over the future of CHIP funding?

Instead of focusing on ways to insure CHIP-eligible children, states are having to make plans to deal with federal funding uncertainty. Some states are already sending 45-day notices of upcoming CHIP expiration. Other states are considering enrollment freezes. States want CHIP to continue and Congress’s delay is placing an unnecessary burden on many states and stress on families across the country.

Q8: Which states are running out of funding first?

California, Arizona, Minnesota, Ohio, Oregon, and DC are all at risk of running out of funds by December or early January. AKA...SOON! If Congress passes CHIP reauthorization in December, this problem can be avoided.

Q9: How is CHIP uniquely situated to meet the needs of kids and working families?

CHIP provides a comprehensive set of benefits that meets kids’ unique health needs, including age-appropriate dental coverage and mental health services. CHIP helps to provide insurance to a group of kids and pregnant women that fall into a coverage gap. They make too much to qualify for Medicaid, but they cannot afford private health insurance. CHIP provides relief to the parents of the almost nine million children and 370,000 pregnant women who fall into this coverage gap.

Q10: Are there any other resources to share about CHIP?

You can find state by state CHIP fact sheets HERE. Read MomsRising’s storybook on how CHIP has helped families all over the country. Check out the Children’s Dental Health Project Tool Kit all about dental coverage and CHIP.

Q11: What can people do to help make sure CHIP gets extended?

You can contact your Senators and Representative letting them know you support an extension of CHIP, and you can submit a letter to the editor in support of CHIP! You can also check out the MomsRising #ExtendCHIP social media toolkit.