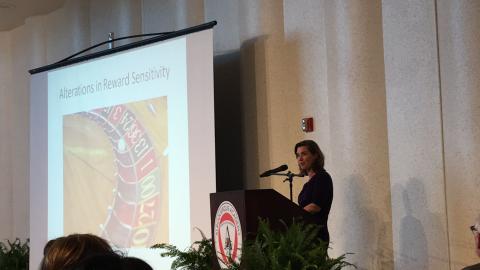 Growing Pains in the Teenage Brain

Why are teenagers so much more impulsive and more emotional, than adults?

“It’s all about the brain,” said Chandler Todd, MD, Associate Professor of Pediatrics at the University of New Mexico, to an audience of parents at the Albuquerque Academy preparatory school in New Mexico, Oct. 5, 2016.

Teens undergo growing pains in their brains, more than their bodies.  Understanding these changes can help parents be more patient with their teens, and more helpful.  Todd, the mother of two said, “I am seriously outgunned by my teenaged daughter.”

Nerve cells in the teenaged brain grow four to five times faster than in the adult brain.  Unused nerve cells are “pruned”, so that in some parts of the teenage brain, 50 percent of neurons die, thus rapidly changing the brain.  Thoughts travel faster, because myelin, an insulating material that increases the speed of nerve impulses, proliferates rapidly.  Todd’s twelve year old son can suddenly read more quickly, and she knows this is because of changes in his brain.

“Rational decisions go out the window,” said Todd, since the teen brain reacts more intensely to large rewards, often without seeing potentially negative consequences.  For example, while hiking in Zion National Park with her children, aged 16 and 12, Todd noticed the danger of the cliffs.  On the other hand, her kids were only excited, without reflecting on potential dangers.

Teens read negative triggers differently, Todd said, and are less harm-avoidant.  The amygdala is the part of the brain responsible for registering fear, and it doesn’t react as much, in the teenage brain.

Indeed, Todd said, adolescents are at their physical peak, and intellectually, they are the equals of adults.  Yet their mortality rates from motor vehicle accidents and risky behaviors, are at a peak, due to these brain factors.

Teens also react more to social and emotional rewards.  This accounts for their heightened response to friends over parents.  Social media can cause its own stresses.  Todd advised that parents speak with teens about their relationships, about bullying, and the potential fakeness of social media presentations.  In her family, there are designated times for social interaction without social media, such as mealtimes.

The teenage body needs more sleep, and may be on a different circadian rhythm than for adults.  Stress and sleep deprivation can cause teens to be more emotional and impulsive. Todd advises a house-wide bedtime, and the importance of parents sleeping themselves.

Studies have shown that negative factors for teens include guns in the home, substance abuse at home, and working more than twenty hours per week.

On the other hand, connectedness to parents is protective, and can result in less risky behavior.  She advised talking with teens about their value system, in advance of situations where “hot cognitions” may be overwhelming.  Knowing the peers who will influence their risk-taking is also important.

Teens are a group with tremendous intellectual flexibility and power, according to Todd.  Strengthening relationships between generations can have important benefits for families and for society.