Gems of Wisdom from 3rd Graders on Gun Violence

I had to share this audio clip of Vice President Biden reading from a binder of letters about guns from third graders in North Philadelphia. 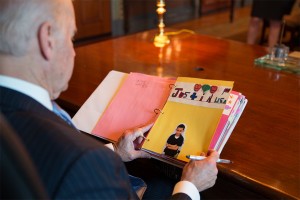 As Biden's mother used to say, "Out of the mouths of babes comes gems of wisdom." These little kids understand, because, coming from one of Philadelphia's most impoverished schools, many of them have seen the effects of gun violence in the streets.

Camilla said: "I want to discuss with you why you want to stop gun violence. I think it's because you want less people passing away."

Marilyn said: "I think you should close gun stores. That's my opinion."

Ishmael said: "I heard you take care of gun violence. Maybe no guns at all, but the police can get safety guns. That will change the world."

Jacob said: "You can go out on the stage and just say, I want to stop using guns."

Damaris said: "I want to discuss gun violence with you, like, why do people use guns and why do they kill people? And don't people be kind to one another? I'm kind to everyone."

Ryan said: "Congratulations, Mr. Biden, on being vice president and dancing with your wife. I'm asking if you'll come with your wife to visit our school."

These children, many of whom likely experienced gun violence, just can't understand why we can't do something about it.

Listen to it here.