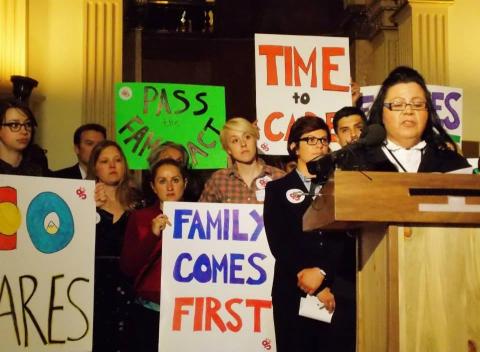 For Mother’s Day – AND EVERY DAY – Pass Paid Leave!

For Mother’s Day, Congress should take action to pass a policy that would make a huge difference for working moms – paid family and medical leave insurance.

Passed 21 years ago, the Family Medical Leave Act (FMLA) was groundbreaking — an important step toward ensuring that we can all succeed at being both breadwinners and caregivers. FMLA has been used more than 100 million times since 1993 to help workers keep their jobs while caring for a family health crisis or a new baby.

But FMLA still has a long way to go. Because FMLA leave is generally unpaid with eligibility and use restrictions, many who qualify for it can’t afford to take it, others suffer financially when they do, and millions more who’d like to benefit from it are excluded.

Shelby Ramirez, a 9to5 activist in Denver, experienced the positive side of being able to use FMLA. She’s also seen its challenges.

Shelby works full-time as a hotel security guard. She is the mother of two daughters and a grandmother of two. Like many people, Shelby also cares for an elderly parent.

When her younger daughter needed surgery at the same time her parent needed immediate medical attention, Shelby was able to take time to care for them, thanks to FMLA. But that time was unpaid.

“Having to take time off unpaid was an enormous financial burden for me,” said Shelby. “After not paying rent and utilities, it took me four months to only partly get caught up with bills. Although FMLA is great and I was able to keep my job, having paid family and medical leave is necessary now and for the future for our families.”

President Obama, in his State of the Union address earlier this year, agreed with Shelby, voicing support for new policies that allow workers to care for their families when needed without losing a job or a paycheck.

“It’s time to do away with workplace policies that belong in a Mad Men episode,” stated the President.

Paid leave would benefit all workers, but is especially important for women, who make up more than half of the workforce and represent nearly three-quarters of family caregivers. More than 70 percent  of mothers are in the workforce, including 61 percent of women with children under the age of one.

Paid leave strengthens economic security for working moms and their families. Having a baby is the most expensive health event that families face during their childbearing years. In fact, 13 percent of families with a new infant become poor within a month. Paid leave keeps new mothers attached to the workforce, and new moms with access to paid leave are almost 40 percent less likely to need public assistance than those who don’t.

Paid leave insurance programs have passed in California, New Jersey and Rhode Island, and are being considered by working families, unions, businesses and policymakers in a dozen other states. In California, employers report that the program has had either a positive or no noticeable effect on turnover, productivity, profitability and morale.

Nationally, 430 organizations from all 50 states have signed on in support of the Family And Medical Insurance Leave Act (FAMILY Act: S.1810, H.R. 3712), introduced last year by Sen. Kirsten Gillibrand (D-NY) and Rep. Rosa DeLauro (D-CT) to create an entirely self-funded national insurance program that would support workers and businesses. Funding for the program would come from very small employee and employer contributions. Employees would receive a portion of their wages when they need to be at home to recuperate from their own serious illness; the serious illness of a child, parent, domestic partner or spouse; the birth or adoption of a child; the injury of a family member who is in the military; or needs arising from a service member’s deployment.

The FAMILY Act will allow women and families to maintain basic spending at a time they need it the most — contributing to stability of families, communities and a growing economy. It’s a simple, common sense solution that working moms, and all hardworking Americans, want. That’s why Shelby and 9to5 members across the country are speaking out, sharing their stories, and taking action this Mother’s Day to encourage elected officials to update FMLA by making the FAMILY Act law and by passing family and medical leave insurance in the states.

About 9to5: With forty-one years’ experience in winning justice for working women, 9to5 leads the way to create a powerful force for change on issues affecting low-wage women and their families. www.9to5.org