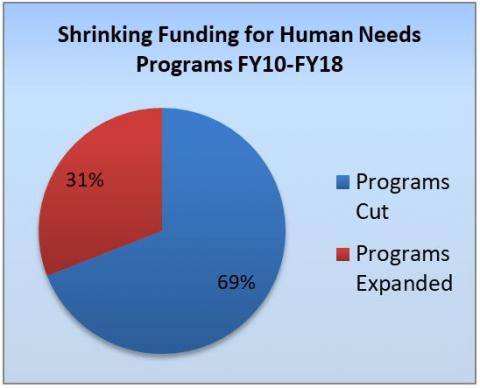 Fact of the Week: Nearly 70 percent of critical human needs programs have lost ground since FY10

Out of the 181 programs tracked by the Coalition on Human Needs (CHN) that assist low-income people, 125 saw funding cuts from FY 2010 to FY 2018 after taking inflation into account. But it wasn’t just inflation eroding the value of the funding. New research by CHN found that more than 40 percent of the programs were cut by 15 percent or more, and nearly 30 percent of the programs were slashed by 25 percent or more. Only 56 programs, or less than one in three, actually received an increase in funding over this time.

While President Trump and some in Congress have been pushing for adding and strengthening work requirements for low-income people receiving assistance, the programs to help people train for and find good jobs have been on the chopping block since FY 2010. Employment services for older Americans has been slashed 58 percent from FY 2010 to FY 2018. Adult and youth training programs provided through the Workforce Innovation and Opportunity Act (WIOA) were cut just under 15 percent. And job training to assist ex-offenders reintegrating into their communities has been cut by more than one-quarter. You can see details on how all 181 programs fared here.

It’s not all bad news, though: 106 of the programs CHN tracked saw increased funding in FY 2018 compared with FY 2017, while only seven lost funding from FY17 to FY18. Funding for substance use treatment programs increased by more than $2 billion overall, and child care funding saw a big boost in FY 2018 to a level more than double that in FY 2010. It’s a good start. In fact, the Bipartisan Budget Act passed this February provided increases in domestic spending levels for both Fiscal Years 2018 and 2019. But the longer-term picture makes it clear that further investments are needed to ensure these programs can lift more people out of poverty.

Unfortunately, today the Trump Administration sent to Congress a $15.4 billion package of spending cut requests, known as rescissions. Once the request is sent, Congress has 45 days to vote on all of it, part of it, or none of it, and rescissions can be passed with a simple majority in both chambers. The cuts would eliminate funds from the Children’s Health Insurance Program (CHIP), from another program that achieves health care savings through the Affordable Care Act, and from a number of other programs. Spending on the items in the package is held up until Congress acts or until the 45 days are up. If Congress takes no action, the cuts are rejected. Some of the funds to be cut were expected to be used to “pay for” increases approved for domestic spending in the two-year Bipartisan Budget Act; these funds were part of the deal that allowed domestic programs to receive a fairer share of the agreed-upon spending increases. The cuts proposed would break this agreement. Some of the funds the Trump Administration would rescind are needed to raise spending to address needs such as public health, job training, child care, and housing; without these funds, next year’s appropriations will not be able to continue the progress made this year. For more on President Trump’s rescissions package, see CHN’s statement.