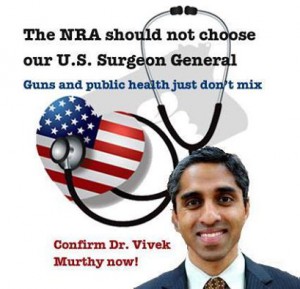 I couldn't believe my ears when I heard about the Surgeon General controversy on the news. Emboldened by its influence on Capitol Hill, the NRA is now flexing its muscles and actively working to derail Dr. Vivek Murthy’s confirmation just because, like many other doctors, he has referred to gun violence as a threat to public health in the past.

Will every qualified public health leader be held to a new standard: that a mere mention of the word “gun violence” is a disqualifier from public service?

According to the New York Times, “The N.R.A.’s highly aggressive and visible campaign against Dr. Murthy shows how the organization has determined that its greatest chances for success in Congress come when it holds nothing back.”  This blatant attempt by the NRA to dictate who should be our country’s leading spokesperson for public health issues is outrageous. But as outrageous as it is, it’s working! In the face of the NRA’s bullying, several swing Senators have indicated that they would vote against Dr. Murthy’s confirmation.

Dr. Murthy is a Harvard- and Yale-educated doctor at Brigham and Women's Hospital in Boston. His concern for gun safety is completely consistent with the consensus of medical and public health experts, and shared by such groups as the American Academy of Pediatrics (AAP), the American Medical Association (AMA) and the American Public Health Association.

In fact, every year, more than 30,000 Americans die from firearms, and about 10,000 children are injured or killed by guns. No wonder Dr. Vivek Murthy, President Obama’s choice to be our next Surgeon General, has referred to guns as a threat to public health.

We can’t let the NRA get away with this bullying. It has no business meddling in who should be the United States’ foremost champion for public health issues. Please join me in telling the White House to stand by its nomination of Dr. Murthy for the position of U.S. Surgeon General and the U.S. Senate to move forward on his confirmation!

*MomsRising will deliver your message directly to the White House and to key Senators wavering in their support of Dr. Murthy’s nomination.

Together, we can be a powerful voice for public health that puts the safety of families and communities first!