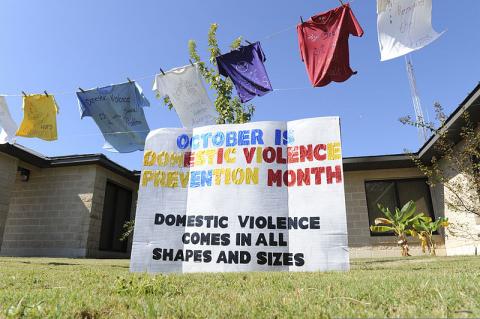 This post originally appeared on TalkPoverty.org. We cannot separate support for domestic violence survivors from support for a robust safety net. TalkPoverty.org is dedicated to demonstrating that we know how to dramatically reduce poverty; we just need to build the political will. Make sure to like TalkPoverty on Facebook and follow us on Twitter!

Since the passage of the Violence Against Women Act twenty years ago, opinions among the public and politicians have shifted remarkably from viewing domestic violence as a private family matter to expressing overwhelming support for survivors who seek outside help to end abuse – at least in the abstract.

However, the devil is in the details.

A sizeable number of Americans (and politicians) claim to support survivors while limiting their ability to access the supports needed to leave an abusive relationship. In essence, people are trying to reap the benefits of appearing “anti-violence” while supporting policy choices that in fact aid and abet abusers.

Almost half of all survivors report experiencing financial difficulties.  Those who support survivors should not force them to choose between abuse and homelessness. Nor should they ask survivors to risk losing their health insurance or custody of their children.

Yet that’s exactly what some of our current policies choices do. The status quo strengthens abusers and harms survivors by:

Weakening direct services. We often have many positive things to say about the advocates who dedicate their professional lives to assisting survivors of domestic violence. Yet at the same time our lawmakers haven’t given them the funding they need to do their jobs. Three vital programs – the Legal Assistance for Victims program, the Rural program, and the Transitional Housing program – had their funding cut in the 2014 appropriations bill. In fact, some lawmakers, such as Congressman Paul Ryan, have supported further cuts to funding for domestic violence service providers. These funding pressures occur at a time when the number of survivors coming forward will likely increase, in part due to referrals from the invaluable domestic violence screening and counseling benefits included in the Affordable Care Act.

As demand for services rises, let’s remember that on one day last year, almost 10,000 requests for services were denied due to a lack of sufficient resources for service providers.  Further, more than 1,500 service provider staff positions were eliminated last year. The fact is when survivors cannot receive services, sixty percent return to their abusers.

Undermining access to attorneys and court advocates. For many survivors, access to civil legal services is essential to ending abuse. Through the court system, survivors can receive civil protection orders (also known as restraining orders), obtain a U-visa, or divorce an abusive partner.  Attorneys can also help survivors gain custody of their children, eliminating a common threat abusers use to force survivors to stay. But despite the demonstrated benefits of legal services, inadequate funding last year resulted in only 12% of domestic violence programs assisting survivors with legal representation, and slightly more than half were able to have an advocate accompany a survivor to court.

Civil legal aid providers—who also handle many domestic violence cases—remain badly under-resourced. In the past few years, more than 1,200 individuals who worked for legal services providers have lost their jobs due to funding cuts as the number of individuals who qualify for legal aid has risen.

This gap in services is alarming. The immense power differential between an abuser and a survivor, along with the effects of trauma, make it exceedingly difficult for survivors to file petitions without support.  Survivors are placed at even more of a disadvantage when their abusers have access to legal resources.

Refusing to pass paid safe days legislation. Many survivors do not even make it to the courtroom because they cannot take off work. Only California, Connecticut, the District of the Columbia, and four cities provide survivors with paid “safe” leave. In the vast majority of states, survivors who work in low-wage jobs with little job security cannot take off multiple days of work to attend courtroom proceedings. They are forced to choose between providing for themselves and their families and their safety; some may stay with an abuser as a result. For a country that claims nearly unanimous support for survivors of domestic violence seeking help, we make it very hard for them to actually access it.

Failing to invest in affordable housing. Instead of choosing to preserve existing affordable units and build new ones, we have lost almost 13% of our nation’s supply of low-cost housing since 2001. While direct service providers strive to provide domestic violence survivors with emergency shelter, it is impossible for them to meet the demand for long-term housing. When we fail to invest in the affordable, permanent housing, survivors are forced to choose between terrible options. They may ask, “When my stay in emergency housing ends, do I return to my abuser, or do I become homeless?” or “Do I stay in this lease with my abuser or do I move out, knowing I have nowhere to go?”

Support for survivors cannot be separated from support for a robust social safety net, affordable medical care and housing, paid safe days, and well-funded domestic violence service providers and legal aid providers. It’s time to evaluate our policy choices. It’s time for all of us to make a real commitment to ending domestic violence—not just in word, but in deed.

Alyssa Peterson is a staff member of TalkPoverty.