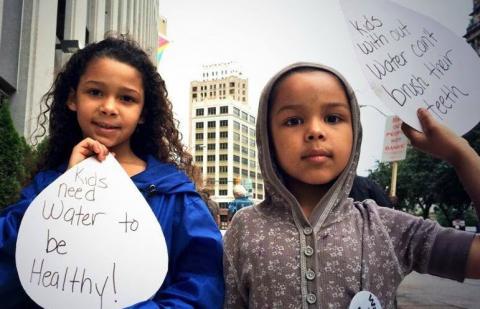 As parents, we do all we can to keep our kids healthy. And we rely on our government to make sure we have access to essentials like clean water. That shouldn't change depending on what color we are, our income level, or where we live.

That's why we're beyond mad about the lead contamination of drinking water in Flint, Michigan. Join us in demanding justice from the Michigan State Legislature. When you click this link, you instantly sign on if we already have all your information. http://action.momsrising.org/sign/Flint_2016/

Here's what happened. In April 2014, in an effort to cut costs, an emergency manager appointed by Governor Snyder switched the Flint water supply from the Detroit water system to the Flint River. Long story short: dangerous levels of lead seeped into the water supply, posing long-term and serious health risks for local residents.

Families in Flint knew there was a problem when the water turned brown, young children broke out in rashes, and the hair of some residents began falling out. Yet officials denied anything was wrong, as they failed to follow federal guidelines around lead safety and utilized faulty water testing techniques. Can you imagine?

Refusing to stay silent, residents started organizing. Researchers found the water supply contained over 900 times the recommended amount of lead. Even the City Council voted to reconnect to the Detroit Water Supply in March 2015. Yet Emergency Manager Gerald Ambrose continued to insist that the water was safe to drink.

Indeed it took WELL OVER A YEAR for the city to acknowledge that there was a BIG problem, and that the water in Flint was NOT safe to drink. There are no words for this kind of failure. Are the children and families of Flint so disposable that local officials didn't act more quickly and comprehensively?

Governor Snyder himself now refers to the situation as a "catastrophe". The New York Times wrote: "Officials at all levels of government acted in ways that contributed to the public health emergency and allowed it to persist for months".

We are outraged. It's time for urgent and comprehensive action on behalf of the families in Flint. Join us in demanding justice from the Michigan State Legislature: http://action.momsrising.org/sign/Flint_2016/

Earlier this month Governor Snyder finally declared a state of emergency in Flint, over a year and a half after the problem began. Residents are now being told to use water filters and/or bottled water, and no one knows how many of the city's almost 100,000 residents have been affected by lead, and to what degree. What we do know is that ingesting high amounts of lead can have devastating and long-term effects on children, the elderly, and the sick. Current estimates are that it could take as much as $1.5 billion to fix the problem.

Would officials have ever been so careless about the drinking water if over 50% of Flint's residents weren't black, and over 40% live below the poverty line, making Flint one of the most impoverished cities of its size in the US? The appointment of an emergency manager in Flint, one of several Black cities across the state to have their elected officials replaced by an appointee from the Governor, is at the center of this crisis.

These kinds of environmental injustices happen time and time again in communities of color. Indeed, "Black people in America - especially those living in rural and poor areas - have long been denied the same access to clean drinking and water for bathing and sanitation as everyone else. The crisis in Flint is not an isolated incident," Black Lives Matter has stated. We must do better.

Following the lead of our local allies, we're demanding the Michigan Legislature do the following:

Join us in speaking out, on behalf of families and parents in Flint: http://action.momsrising.org/sign/Flint_2016/

ALL of our children and communities deserve access to safe drinking water. What's happening in Flint is a tragedy and a disgrace. Our leaders must be held accountable, and we must do all we can to ensure it never happens again.