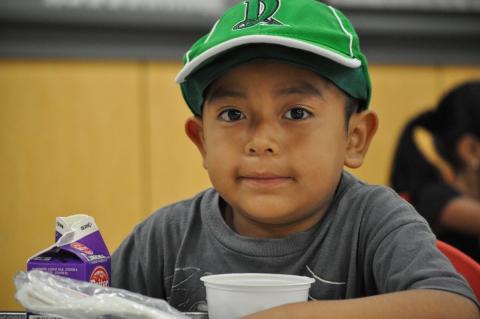 Once again children and families are under attack. After failing in past efforts to slash funding for the Supplemental Nutrition Assistance Program (SNAP, also known as food stamps), the Trump administration is taking a new approach to crippling the program millions of families in the United States depend on to survive and alleviate their hunger pangs. Recently the administration proposed regulations to tighten restrictions on access to SNAP benefits for unemployed and underemployed people who can’t document sufficient weekly work hours. This rule would take food assistance away from an estimated 755,000 people who cannot find work. It is also a callous response to the bipartisan Farm Bill which passed in the fall and rejected harmful cuts to SNAP. If this rule goes forward, it’s not just unemployed and underemployed adults who will go hungry—poor children suffer when adults in their household lose access to food assistance. But it’s not too late to protect these children if you make your voice heard immediately and tell the Department of Agriculture not to take food away from needy families.

Children need reliable access to healthy food to thrive. Hunger and malnutrition jeopardize children’s health, development, school readiness and job readiness. SNAP helps feed more than 40 million low income people in America including nearly 20 million children—more than one in four—and lifted more than 1.5 million children out of poverty in 2016, more than any other government program. Given the critical role SNAP plays for children and families in communities across the country, the proposed changes that would kick hundreds of thousands of people off SNAP are mean spirited, short sighted, and harmful, will increase food insecurity, and must be stopped.

While current law doesn’t permit SNAP work requirements for children or adults with children, the ripple effects of these expanded restrictions extend beyond the people they target. Imposing work requirements on able bodied adults without dependents harms children too because children living in poverty often depend on pooled resources including SNAP benefits from extended family members, such as older siblings, who don’t claim them as dependents. This means time limits will hurt not only the adults cut off from the food they need to survive but also children and others they may be helping support. Studies also show low-income parents without primary custody of children often rely on the availability of SNAP and other forms of assistance including the Earned Income Tax Credit to help them stretch available dollars from work and afford child support payments. In both scenarios additional burdensome restrictions on SNAP eligibility for these adults means fewer available resources to support the health and well-being of children.

Young people aging out of foster care without permanent families also will be at increased risk. They may continue to suffer the trauma that led them into care or resulted from their time in care, leading to high rates of unemployment, poverty and increased need for food assistance. This vulnerable population already faces enough formidable barriers to accessing SNAP due to existing work requirements. Any efforts to further restrict access or eliminate state exemptions from these requirements would be particularly harmful.

The newly released 2020 Trump Budget makes clear this administration is willing to slash programs needy families depend on to make ends meet while increasing military spending and diverting billions to the border wall. The President’s harsh budget calls for $220 billion in spending cuts to SNAP over the next decade. Let’s fight back at a White House that takes aim at basic supports millions of children depend on.

The Children’s Defense Fund will be joining many other organizations and individuals submitting comments opposing this SNAP rule before the April 2 deadline and you can too. Learn more about this harmful policy and submit your comments with this easy-to-use tool from our friends at the Food Research and Action Center (FRAC). Join us right now in speaking out against harmful changes to SNAP! As the Food Research and Action Center puts it, echoing the gospels, prophets and teachings of every major religion: Food for the hungry shouldn’t have a time limit.