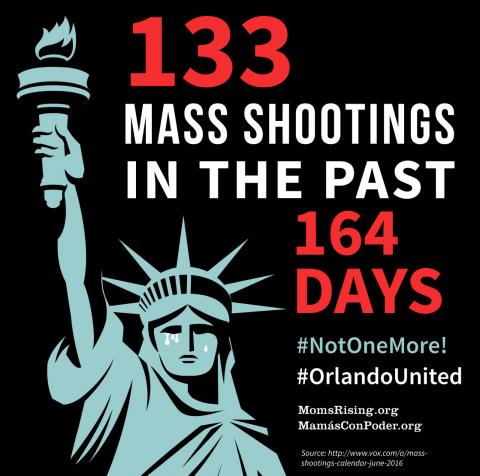 On Wednesday, U.S. Senator Christopher Murphy from Connecticut inspired the nation by filibustering in the Senate for 15 hours in an effort to move forward gun safety policy. News reports say there now will be forward progress with a U.S. Senate floor vote as early as Monday!!!

But we have to make sure that progress actually happens by making our voices heard NOW!

*Sign here to back up the members of Congress who are calling for gun safety reform. Tell your U.S. Senators to take this precious opportunity to support universal background checks, keep guns out of the hands of dangerous individuals including terrorists and domestic abusers and ban civilian access to military-style assault rifles and high-capacity magazines.

Our hearts ache for the forty-nine lives lost and the over fifty people injured in Orlando this past Sunday. We are deeply hurt by this senseless hate crime against the LGBTQ+ community, and also deeply disappointed in Congress’ inaction so far in preventing mass shootings like this one and the 133 others that have occurred in 2016 alone.

It doesn’t have to be this way.

**We need you to speak out in favor of these gun safety policies because the NRA is doing its best to stop this progress. Make sure to reach out to your U.S. Senators NOW.

Tens of thousands of you spoke out right after the attack in Orlando. And now we need your voice again to speak out on comprehensive measures that prevent gun violence. Don’t forget to write your members of Congress: http://action.momsrising.org/sign/OrlandoUnited/

Please also spread the word by posting the action link on Facebook and/or Twitter. The more of us who take action, sign on, and spread the word, the faster we’ll have safer communities.