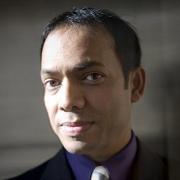 Rais Bhuiyan
Share This
Add your voice to the comments

This blog post originally appeared in World Without Hate.

I am an American Muslim. I deplore the acts of violence and hatred that are wrongly performed in the name of my religion. I denounce the actions of ISIS, Al Qaeda, and all terrorist organizations. They do not represent me or my beliefs, and they do not reflect the lessons taught in the Qur’an. I also denounce all manifestations of hateful thoughts, acts, writings and deeds.

While I respect you for attaining your leading position in the Republican Party’s run for President, as such a leader, I urge you to learn about and get to know the minorities and immigrants who call the United States home. American Muslims are an integral part of our society. They are doctors, lawyers, teachers, first-responders and firefighters, business owners, police officers, and peace activists, like me. Over 10,000 American Muslims currently serve in the U.S. military and are ready to put their lives on the line to protect our freedom and liberties. American Muslims, like their fellow citizens, are patriotic Americans, who have been living and working in this country for centuries. It not only devastates American Muslims like me for this country’s leaders to question our allegiance, it sends an extraordinarily distressing message worldwide. You have a unique position in American society, people take your words seriously, they listen to and believe you. It is imperative that you properly represent all Americans, and that includes Muslims who are voters, citizens, professionals, family members and loyal Americans. As citizens of this nation, we should be doing things to strengthen and empower one another, not discouraging or demonizing some among us, and not casting doubt upon their loyalties and love for our country.

I have spent my life preaching the value of radical forgiveness ever since I was shot in the face ten days after 9/11 by an American espousing values similar to the ones you voiced yesterday. I know how tempting it was to BLAME the whites, the Christians, or all the Americans’ because of the white supremacist who shot me in the face and killed two innocent South East Asians and voluntarily told the media, after his arrest, that what he did, most Americans wanted to do, but they did not have the guts to do it. He BLAMED me and "my kind" for 9/11.  He thought that America was no place for Muslims until I started a campaign to save him from death row. He was ultimately executed, but not before he called me “brother” and he said that he loved me.

America needs to understand, to repair, and to heal.  America does deserve better.  We deserve better treatment from ourselves.  We deserve a country that lives up to its original creed – that ALL men (and women) are created equal.  At a time when most Americans were uninformed, misinformed, or simply afraid of Islam, Thomas Jefferson imagined Muslims as future citizens of his new nation. His engagement with the faith began with the purchase of a Qur’an eleven years before he wrote the Declaration of Independence. “Neither Pagan nor Mahamedan [Muslim] nor Jew ought to be excluded from the civil rights of the Commonwealth because of his religion.”  — Thomas Jefferson, quoting John Locke, 1776

Your recent comments against Muslims are spreading fear, hate, and causing destruction in our society, and it’s not healthy. Your recent speech reminds me of the famous quote of Abraham Lincoln – "America will never be destroyed from the outside. If we falter and lose our freedoms, it will be because we destroyed ourselves." I would welcome the opportunity to sit down with you, as one American Muslim, to talk with you further about the contributions that American Muslims can make to improving our national security and helping this nation to be the best it can be. Muslims have value, Mr. Trump, and all Muslims are not violent. I would like to demonstrate these truths to you.