Sarah Francis
Share This
Add your voice to the comments

Imagine for a moment if antibiotics didn’t work.

According to the Centers for Disease Control, approximately two million people acquire bacterial infections in U.S. hospitals each year. [2] About 70 percent of those infections are resistant to at least one antibiotic. [3] The trends toward increasing antibiotic resistance show no sign of slowing down. [4]

Why are infections in people becoming resistant to antibiotics? The U.S. Food and Drug Administration, Centers for Disease Control and Prevention, the American Academy of Pediatrics, and the American Medical Association all have highlighted the link between non-therapeutic uses of antibiotics in food animal production and the crisis of antibiotic resistance in humans.

The Food and Drug Administration, a government agency in charge of safeguarding the public health, has done shockingly little to protect us.  It’s time for consumers to act.  That’s why MomsRising, together with the Meat Without Drugs campaign, is going straight to supermarkets.  We’re calling on Trader Joe’s to commit to selling only meat raised without antibiotics. 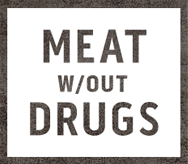 Sign on to our open letter and together we’ll ask Trader Joe’s to lead the way in getting antibiotics out of our food chain!

Why Trader Joe’s? This campaign starts with Trader Joe’s – they’re an industry leader and we want them to start a chain reaction throughout the marketplace. And they can still keep prices low: Research from Consumer Reports shows that meat raised without antibiotics doesn’t have to be expensive, just a few more pennies per pound.

According to one MomsRising mom, right now, shopping for meat at Trader Joe’s is super tough:

“Honestly, I could tell you horror stories about trying to buy antibiotic-free meat at Trader Joe's. It's this ridiculous whack-a-mole game. It's a meat minefield and I gave up - but not before a lot of very verbal grumbling and confusion in the store.”
-Ashley, CA

If Trader Joe's committed to only selling meat that is antibiotic-free, Ashley and parents across this country wouldn't have to search when they shop.  Finding meat without antibiotics is critical to the health of our families.  According to the Centers for Disease Control and Prevention, antibiotic use in animals has directly led to the emergence of resistant bacteria.

Meat without antibiotics will save the United States a lot of money in the long run.  According to the Centers for Disease Control and Prevention, antibiotic resistance in the United States costs an estimated $20 billion a year in excess health care costs, $35 million in other societal costs and more than 8 million additional days that people spend in the hospital.

Our families need meat without drugs in this country now. Retailers drive change throughout their supply chains, but first they have to hear from you.

*Tell Trader Joe’s to lead the way in getting antibiotics out of our food chain!

And please share this link on Facebook, on Twitter, or simply forward this email to a few friends.  Together we can look forward to a future where antibiotics continue to come to the rescue when we need them most.

Together we are a powerful voice for children and families,

This blog is a part of MomsRising’s Supermoms Against Superbugs Blog Carnival! Please check out other great posts from experts, parents and activists on the front lines in the fight to keep our food healthy and safe.

P.S.  Huge thanks to the Meat Without Drugs Campaign, Consumers Union and FixFood for all the great work they do on this issue.

P.P.S.  Check out this new video produced by Food, Inc. directed by Robert Kenner and narrated by actor Bill Paxton.