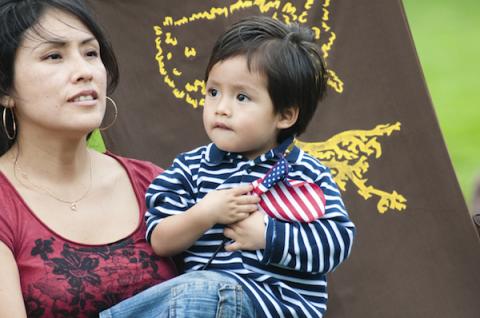 Elisa Batista
Share This
Add your voice to the comments
I have bad news. Amidst growing anti-immigrant rhetoric that's harming our children and our economy, earlier this week a divided 5th Circuit Court of Appeals dealt a cruel blow.
What happened?
Well, the 5th Circuit Court of Appeals decided, in a ruling against the U.S. Department of Justice (DOJ), to continue to stall implementation of the Obama Administration's Executive Action on Immigration that would have protected millions of immigrant families from separation and allowed them to be more visible in their ongoing contributions to our country’s economy.
However, the fight isn't over. We still have a chance to stand up for fair treatment of immigrant families and for our economy.
*Can you take a quick moment to have a lasting impact? Join us to urge the DOJ to quickly appeal this unjust ruling. CLICK HERE TO SIGN.
Taking action is important for our families and also for our economy. Research shows that immigrants play a large and important role in our economy, founding many of our largest companies, as well as building small businesses that fuel our economy. In fact, an estimated 30 percent of the small business growth over the last two decades was driven by immigrants — and studies also show that immigrants are more than twice as likely to start a business as U.S.-born citizens. In addition, immigrants or the children of immigrants founded more than 40 percent of Fortune 500 companies.

So how did we get in this legal situation, anyway? In November of last year, President Obama issued an Executive Action to expand a program for DREAMers (youth and young adults who came to the U.S. as children without documentation), and to establish a new program that would help undocumented immigrant families who meet specific criteria not to be separated from their loved ones, as well as to work legally. Following this, a number of governors and attorneys general challenged Obama’s Executive Action by bringing a lawsuit against it.

Legal scholars say this politically motivated lawsuit against Obama’s Executive Action for immigrants has no legal merit. It’s time for the DOJ to quickly appeal! CLICK HERE TO SIGN.

135 scholars and professors of immigration law in the U.S., including Washington University Law Professor Stephen Legomsky, one of the country’s top immigration legal scholars who is regularly called for testimony in Congress and by national media, have noted that not only does the President have the power to enact this executive action, but previous presidents have implemented their own executive actions which likewise were completely within their legal authority.

In spite of this, those who filed the lawsuit have thrown in a politically motivated delaying tactic. Every day that executive relief on immigration isn't implemented, 5 million immigrants, including children, live in fear of being separated from one another.

*Please sign on to join us in urging the DOJ to move as quickly as possible to appeal this anti-immigrant lawsuit so that it goes before the Supreme Court! CLICK HERE TO SIGN.

Before the lawsuit, both programs were supposed to start six months ago.

To fully honor the contributions of immigrant families to our communities and economy, we need to comprehensively overhaul our broken immigration system. But until then, within our grasp are the two programs in the President’s executive action - DACA and DAPA - that will significantly help keep many families together right now.

Additionally, this executive action would help bolster local economies and our nation as a whole. Top economists estimate that, conservatively, the DACA and DAPA programs would add $90 billion over the next ten years in an expanded labor force and an increase in revenues from payroll taxes. Programs such as these also help breadwinners to provide for their children.