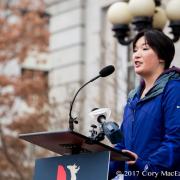 My name is Amber MacQuarrie, I’m a single mom of two kids, and I would like to tell you what having access to healthcare has done for us. Healthcare is the reason my kids have a mother, at least twice over. It’s the reason my 9 year old daughter can now walk and no longer needs her wheelchair. It's the reason my son is as well adjusted as he is.

Without healthcare, as a self employed individual at the time, I would not have pursued answers to the medical issues that have plagued me. I would have suffered through as so many Americans are forced to do. No heart surgery. No discovery of blood clots in my lungs. No vasculitis diagnosis that was leaving me unable to walk among other things.

A core concept of our country is “life, liberty, and the pursuit of happiness”. Lack of healthcare would have been the reason for my death, which would literally be the opposite of those ideals.

Six months ago, my daughter was a wheelchair user. Don’t get me wrong, wheelchairs are wonderful things, they equal freedom for so many. For a child though, who was a seemingly active 9 year old then to become disabled, it’s been a wonderful thing for her to simply be differently abled now living what is a more normal life for her. Healthcare has enabled us to find a medication that along with physical therapy, means she can walk and run again. She doesn’t need someone to push her in her wheelchair at the back of the pack, and she can’t swing past her peers to the front of the pack on her arm crutches anymore, instead she can run alongside them. We finally put her wheelchair in storage two weeks ago, and with continued healthcare for her, I hope she’ll be able to run with her friends for a long, long time.

Currently, while running is possible, it’s limited by the homelessness that my kids and I are faced with. I haven’t had a kitchen in over a year. The instability that the housing crisis brings, plus inflation and the perpetual poverty that forces us into, as well as disability and the subsequent managing of appointments, etc., is already such a burden that builds and is compounded against itself. Imagine, if you can, how the lack of healthcare would add to my sleepless nights.

With as tumultuous as our lives have been these last years, our mental health has taken a significant hit. Not only myself for my struggles, and my daughter for hers, but my 12 year old son who lives this life alongside us, in a different way. Healthcare covering mental health services is just as imperative as it covering the CT scan that found my blood clots, and I can’t imagine how much MORE of a struggle this life would be without that covered support in place.

All of this to say….healthcare is more than money and medical bills. It’s freedom, and liberation, and hope, and growth, and progress. Without it, we’re stagnant as a people and a country, which is the opposite of what every generation wants for those to come. I want all of that for my children, and healthcare is a fundamental pillar towards building and supporting that reality.