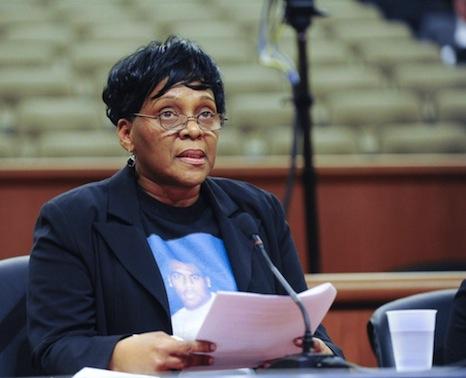 Mothers in New York State are asking for our help. A group of families who have lost loved ones to police brutality, dating back to 1994, have come together to urge Governor Cuomo to appoint a special prosecutor for police brutality cases.

Right now, through executive order, Governor Cuomo can make a difference. Join us in supporting these moms in their fight for justice: http://action.momsrising.org/sign/NY_StateJustice/
These moms are not alone. Shortly after the news that there would be no state indictment for the officers who killed Eric Garner, NYS Attorney General Schneiderman asked Governor Cuomo for immediate authority to investigate and prosecute police killings of citizens.  Cuomo could do this with one stroke of his pen, but so far, he has not.

Instead of issuing an executive order and meeting the demands of these mothers, Governor Cuomo's suggested a policy proposal falls short of their demands. This proposal is expected to pass on April 1st, meaning we have less than 1 week to influence the negotiation process and strengthen his response to meet the demands of New Yorkers.

Will you join us in calling on Gov. Cuomo to immediately grant authority for New York’s Attorney General to investigate and prosecute cops who kill civilians? Without a special prosecutor law enforcement will continue to kill black and brown New Yorkers at will with no legal consequences for their deadly actions.

Following the devastating grand jury decision not to bring the killers of Eric Garner to trial, even though the coroner ruled his death a homicide, thousands of New Yorkers took to the streets, shut down avenues, bridges, tunnels and engaged in sustained acts of peaceful protest.  Our elected leaders are paying close attention to our demands for change and vowing to enact bold and transformative policing and criminal justice reforms. But it's been 3 months and little reform has materialized. We must continue to raise our voices if we ever hope to force state leaders to enact the type of robust reforms necessary to fix the police accountability system.

The sad truth is that Eric Garner’s case isn’t unique. When officers kill, they are almost never held accountable because of an inherent conflict of interest that arises whenever local prosecutors investigate the police officers they work with every day.  And the chances of prosecution are lower when the victim is Black. In the last 15 years, at least 179 people — 86% whom were black or brown — have been killed by on-duty NYPD officers. Only three of the tragic police killings led to an indictment and only one of the officers has been convicted.

We need Governor Cuomo to act now. Now more than ever, we must demonstrate that the movement is alive and well, that New Yorkers continue to be outraged by the senseless killings of so many of our black and brown neighbors at the hands of police and that we will not wait for the next Eric Garner before our leaders in government take action. We need Gov. Cuomo to send a clear message to officers across the state that they will face a rigorous investigation and severe legal consequences for killing black and brown civilians.

Together, we are a powerful force for New York families. Join us!

Take Action!
Stand With These Mothers for Justice!