A mom and marine vet on gun safety 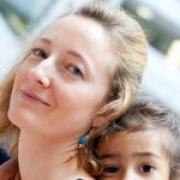 Charlotte Brock
Share This
Add your voice to the comments

Charlotte Brock made this statement to lawmakers and the news media at MomsRising's July 9 "Moo with MomsRising" gun safety action on Capitol Hill.

I am a mom and a veteran of the Marine Corps, where I served for seven years. I’d like to talk to you about firearm safety and the significance of passing legislation to ensure everyone who purchases a gun legally in this country passes a criminal background check.

In the Marine Corps, before a recruit ever touches a weapon, he or she goes through a rigorous selection process including psychological evaluation, mental ability tests, and a criminal background check.  Only when it is certain that a young man or woman does not have a criminal record or a history of mental illness is that new recruit allowed to enlist.  In basic training, a rifle is issued to each recruit.  Immediately, the recruit begins to learn about his weapon.  Serial number, individual parts, how the rifle functions, what caliber it is, how it should be cleaned and maintained, its specifications, its range, and most importantly, how to hold it safely and how to secure it when it is not held on one’s body.  Many hours are spent memorizing safety rules and practicing proper weapons handling techniques.  Safe weapons handling is drilled into each individual to the point that it becomes second nature.  Even though I was first trained in carrying and using my pistol over a decade ago, it is still so engrained in me that the other day I found myself carrying my power drill over my right shoulder, pointed towards the sky, because this is how I would carry a pistol if I were walking with it, unholstered, in a non-tactical situation.

Before a soldier or Marine is ever issued a single round of live ammunition, that individual is made to learn, by heart, word for word, the safety rules.  There are four, and I still know them word for word.  The mnemonic is TREAT NEVER KEEP KEEP.  (TREAT every weapon as if it were loaded.  NEVER point a weapon at anything you do not intend to shoot.  KEEP your finger straight and off the trigger until you are ready to fire.  KEEP the weapon on safe until you intend to fire.)  The safety rules on the range are explained ad nauseam and enforced to the letter.  Even in a war zone, a number of measures are taken to ensure that soldiers, sailors, airmen and Marines follow weapon safety procedures.  Weapon conditions (how ready your weapon is to be fired) are announced and enforced; clearing barrels are installed in front of every major installation, and you have to clear your weapon before passing through the door.  Weapons are inspected, cleaned, and accounted for daily.

The message is very clear: handling a weapon is serious business; it is a huge responsibility and only people who have done the work of learning about their rifle or pistol and have proven that they know how to handle their firearms safely are accorded the privilege of being issued a weapon.

Even with all these safety measures and incredibly thorough training, accidents do happen in the military: there are accidental discharges, weapons that are misplaced.  These are rare, but can be deadly.

If those who know guns best put such an emphasis on background checks, training, and safety regulations, even in a controlled environment of responsible adults, why is it that in the civilian world, out here where our children live, there is so little control over how people acquire and use their guns?

Many gun owners, most of them responsible and law-abiding citizens, fear that enacting one single law regulating the purchase or ownership of firearms constitutes a step on the slippery slope towards taking away their freedom.  Yet we routinely register our vehicles with the DMV; we accept that background checks are a normal process in applying to college, or for certain jobs.  And we have no problem limiting access to certain types of weapons or explosives.  Passing background checks is not about government intruding on citizens’ rights; it is not about taking away guns from law-abiding citizens; it is not about telling anyone they can’t go hunting or shooting on the range.

This is not about fear or hatred of firearms. I, personally, enjoy spending some time on the range and I’m a pretty good shot.  I am comfortable around firearms and carried one on my body night and day for a total of twelve months when I was deployed to Iraq. It is about creating a safer society and reducing gun violence.

I have a two-year-old son.  I worry, as do most parents in the wake of the school shootings, that one day, his school will be targeted; his classroom; him.  The reason I am here is that I don’t want to wait for the next tragedy to demand change; I want to do everything I can to prevent my son and every other child from being torn apart by bullets.  I have seen the bodies of soldiers killed in combat.  That similar scenes of carnage can and do take place in our schools, that our tiny children have died as if they were on a battlefield instead of a classroom is horrible beyond words.  That some people think the answer is more guns, is beyond absurd.  Knowing what goes into training military recruits in safe weapons handling and use, I find the notion of arming teachers ridiculous and offensive.  Insurance companies know this: they won’t even insure schools in which teachers carry handguns.

Would background checks alone have prevented the Sandy Hook massacre? Probably not.  But might they prevent some shootings? Absolutely.  We have no way of knowing where or when a shooting will happen, or who will be responsible for an act of gun violence towards an innocent person, whether man, woman, or child.  Mandatory background checks on all weapons purchasers, whether in a store or at a fair, would certainly mean that people who have a criminal record would have a much harder time acquiring a gun.  And even if only one death were prevented thanks to this measure, wouldn’t it be worth it?  In the abstract, some may answer no, the disadvantage of extra paperwork, or extra wait time, is too high a price to pay.  But if that one death is your child, your loved one, there is no doubt: it is more than worth a bit of extra time and effort to ensure you don’t face the nightmare that so many parents at Sandy Hook and across the country face today.

These are not isolated incidents, and the adults who owned the weapons no doubt saw themselves as responsible gun owners.  There is clearly a widespread lack of training and a lack of understanding of the immense responsibility that goes hand in hand with owning a gun.  The fact that, in a murder case that continues to make national headlines, the defendant can state, in his defense, that he had forgotten he was wearing a loaded gun, is simply indefensible.  Right now we have a culture that sees guns as no big deal, and because of a very vocal minority, when we hear “gun” we are likely to think of “rights” rather than “responsibilities.”  Guns are marketed to children – not toy guns, real rifles – clearly showing the profound irresponsibility of the gun manufacturers and the gun lobby.

People need to know that owning a gun does not automatically make them safer.  Gun rights advocates and gun manufacturers have marketed guns aggressively to women in the past few years – look at the number of pink guns for sale – pushing the message that owning a weapon will make a woman safer.  In fact, for every instance in which a gun in the home is shot in self-defense, there are 7 assaults or homicides, 4 accidental shootings, and 11 attempted or successful suicides.  In states where criminal background checks are required, there are fewer domestic gun violence deaths.  Unfettered, on-demand access to guns makes women more, not less, likely to be victims of gun violence.

I am also especially concerned about gun violence because the issue disproportionately affects the veteran community, of which I am a member.  Many people do not realize that most gun deaths are self-inflicted: suicides account for 3 out of 5 gun-related deaths in this country.  It is well known that access to firearms is a risk factor for suicide. On average, 20 veterans commit suicide every day; veterans are also more likely to use a firearm to commit suicide compared to the general population.  Mandating background checks on firearm purchases would not solve this complex problem completely; but if even one veteran life is saved because a firearm is not immediately accessible, then that is a victory for our country.

Passing legislation requiring background checks in all 50 states would be an important step in changing the culture from one of carte blanche entitlement to guns to a culture of responsible, safe, and informed gun ownership.  As a Marine veteran, I have been around firearms enough to enjoy them, appreciate them, and, especially, respect their lethal potential.  As a mom, I need to do all that I can to ensure that my child does not become a gun violence statistic.  I can’t do that alone.  We need to change the status quo.  We need to come together, gun aficionados and those who never want to see or touch a gun.  Mandating background checks is a no brainer; the vast majority of Americans support this measure and there is no down side.  We will not be cowed by the NRA or any other group that opposes common-sense gun laws when our lives and our children’s lives are at stake.