A Close Up of Gaby Pacheco, One of this Country’s Best Known DREAMers

Gaby Pacheco’s story will be featured in a collection of stories for young people by Lily Eskelsen and Alberto Garcia called “Rabble Rousers” about people who organize communities to fight for social justice. 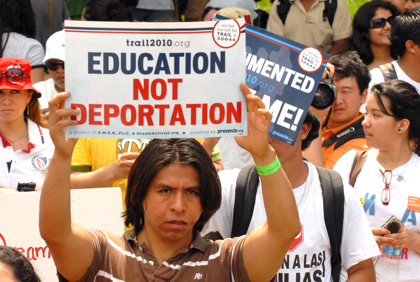 Gaby was born in Guayaquil, Ecuador. She doesn’t remember much of her city, but her family was close. She remembers her grandmother saying, “If everything else is taken from you, you will always have family.”

When Gaby was eight years old, her parents came to the United States where they believed their children would be safer and be able to get a good education. They didn’t have the proper documents giving them permission to come. This isn’t a crime. But it is against the civil law, and there is always a risk that undocumented immigrants, even small children, can be deported – sent back to their home countries.

Undocumented immigrant children have few rights, but they do have the right to go to a public school. Gaby worked hard and got good grades. Her teachers recommended her for a gifted and talented program. In middle school she was in the honors programs. In high school she was in Advanced Placement classes and in the Navy ROTC program. Gaby was always among the top students in her class. She began to dream of becoming a Special Education teacher.

But to some, none of this was important. To them, she was an “illegal.” Gaby thought it was an unfair thing to call anyone. No one called bank robbers “illegals.” No one called kidnappers “illegals”. There was only one group of people who were called “illegal.” People like Gaby.

“I have a secret,” someone would whisper to Gaby. And Gaby would listen and hear their stories about coming to the states as children, sometimes as babies. Some had brothers and sisters who were born after the family arrived. Those children were citizens while children born in the old country, were not. Gaby heard their fears that their families would be separated. But she also heard their dreams.

Some had dreams of becoming doctors and teachers and inventors. Some wanted to start businesses. They whispered their dreams, afraid someone might overhear them and turn them in.

Gaby did not whisper. Her parents had brought her to the states so she wouldn’t have to be afraid. She knew that it was easy to be fearful when you felt all alone. When you knew there were others like you, the fear would go away. When the fear left, you could tell the truth. When people heard the truth, they would understand why changes were needed in the immigration laws.

Gaby joined others in fighting for the DREAM Act. DREAM stands for Development, Relief and Education for Alien Minors, which nobody will remember. But no one will forget that it stands for those who have a dream of making the only country they have ever known, their true home. Under the DREAM Act, undocumented children could qualify for documents if they could show that they had graduated from high school; stayed out of trouble; and were enrolled in college or willing to serve in the military. It didn’t solve the bigger problems of immigration, but it was a place to begin; a light of hope for young people like Gaby.

Gaby wasn’t waiting for someone to rescue her. She became one of the founders of a youth-led group called Students Working for Equal Rights (SWER) to give a voice to undocumented students. She won election as the state student president, becoming the official voice of over one million Florida college students. She spoke about the DREAM Act, and was open about being undocumented, knowing she could be deported. She would stand before rallies and meetings and press conferences and bravely say her name. She said, “I have a face. I have a name. I have a story.”

Gaby and her friends, Felipe Matos, Carlos Roa, and Juan Rodriguez, decided more people needed to hear their stories and their dreams. They organized a march they called The Trail of Dreams, walking from Miami to Washington, DC. The walk humanized young people who were so often only referred to as faceless and frightening “illegals”. At every stop, Gaby and her friends told their stories. They met those with love in their hearts. They met those with hate. At one small gathering at a university in South Carolina, an angry man shouted and cursed at them. Gaby did not yell back. She simply asked the man that they be allowed to finish, uninterrupted. He sat down. They told their stories, talked about the DREAM Act and told people how they could help pass the law to help “dreamers”. 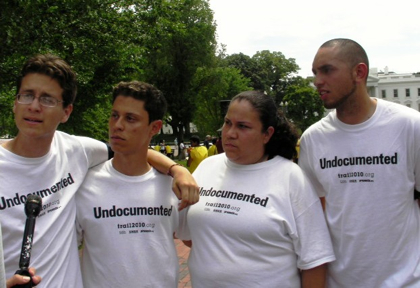 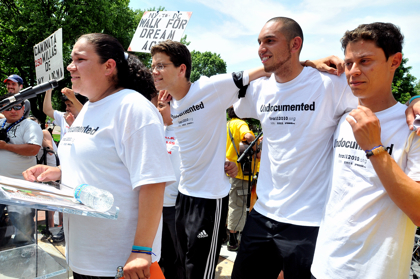 After the presentation, the man came up to Gaby and apologized. With tears in his eyes, he told her that he was ashamed. He said, “I didn’t know. I didn’t understand. I’m sorry.” He told her of his own troubles and his dying wife. Gaby hugged him and said she would pray for him. She wasn’t surprised at the miracle of this change of heart. She had seen it before. She said, “Everywhere people are good, even the angry ones. Sometimes they have problems and they lash out at the ones they think are to blame for their problems. But when they hear us, they know that we are good people, too. And the hate and anger just disappear.”

After four months and 1,500 miles, Gaby and her friends made it to Washington, DC. On May 1, 2010 there was a huge celebration and rally in front of the White House. Thousands cheered for them. Reporters wrote about them. But the DREAM Act did not pass Congress. It failed by only eight votes in the Senate.

However, the dreamers had won the heart of President Barack Obama. He had no authority to pass a law without Congress, but on August 15, 2012, he approved a change in immigration regulations called Deferred Action. It gave young people who would have qualified under the DREAM Act special temporary permission to stay without fear of deportation while Congress was left to find the eight more heads and hearts necessary to pass practical, compassionate immigration reform.

Gaby’s grandmother had said that if everything else were taken away, you would always have family. Gaby had gathered a larger family made of friends, activists and strangers united in fighting for the dreamers. She said that when she began her struggle she felt like a bird looking at the country she loved through the bars of her cage. The day Deferred Action for dreamers was approved, Gaby said, “The cage door is open. I’m a bird who can fly.”