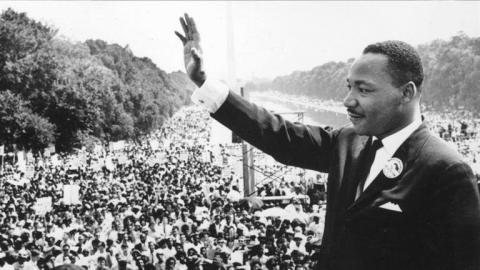 A Call to Conscience

January 15th would have been Dr. Martin Luther King, Jr.’s 90th birthday. How should we honor him today? Earlier this month Dr. King’s personal attorney and friend Clarence Jones convened an intergenerational, interracial, interfaith group for the launch of the Gandhi King Institute for Nonviolence and Social Justice to try to answer that question and issued “A Call to Conscience.” It opens:

“Today, as we remember Reverend Dr. Martin Luther King, Jr., we watch in anguish as many achievements toward a more just and equal society we believed were secure are being eviscerated in front of our eyes.

“In this hour of constitutional crisis and moral emergency, do we wish to truthfully honor Dr. King’s life and further his legacy?

“If we wish to honor Dr. King, we must shake the foundations of our grotesquely unequal social and economic order. ‘We as a nation must undergo a radical revolution of values,’ he warned us. ‘We must rapidly begin the shift from a thing-oriented society to a person-oriented society. When machines and computers, profit motives and property rights, are considered more important than people, the giant triplets of racism, extreme materialism, and militarism are incapable of being conquered.’”

Our nation is at a critical inflection point where evil and greed are running amok and it is not enough to simply celebrate Dr. King. We need to figure out what he would be doing right now and follow him through nonviolent action: from voting to organized protest.

“A Call to Conscience” goes on: “Dr. King’s mission was ‘to redeem the soul of America.’ His life’s work was to hold fast to the Spirit of the Lord and attend to the needs of ‘the least of these’—to help feed the hungry, provide shelter to the homeless, release the captives, free the oppressed, and to follow the Lord’s commandment to have no other gods before Me. Thus, Dr. King decried the blasphemy and idolatry of Americans who had increasingly come to worship ‘the false god of nationalism,’ a religion that ‘affirms that each nation is an absolute sovereign unit acknowledging no control, save its own independent will.’ He warned us against the prophets and preachers of this false religion, specifically ‘the advocators of white supremacy, and the America First movements.’ To his Christian brothers and sisters, he declared: “One cannot worship this false god of nationalism and the God of Christianity at the same time. The two are incompatible…’” As usual our greatest American prophet’s prescient words speak to us right now.

“A Call to Conscience” continues: “Today we face the gravest danger to democracy and rule of law since 1877, when federal troops withdrew from the former Confederate states, crushing the hopes of former slaves that Reconstruction would bring them equal rights as promised under the 13th, 14th, and 15th Amendments. We believe that the threat of civil unrest and violence is higher today than at any time since the riots and uprisings that followed Dr. King’s assassination more than fifty years ago. If we do not pull our nation back from the brink, find ways to confirm our common humanity in all interactions and communications, and unite in the common struggle to defend the core principles of our democracy, we are at risk of moral, social and national collapse….” And it ends with the conviction that it is time for a massive new nonviolent movement for justice and peace to save America’s soul:

“We will not stop until we eradicate the systemic violence inflicted on our brothers and sisters, and all of us, by white supremacy, and the legacy of chattel slavery; mass incarceration and militarism at home and abroad; sexism and gender discrimination in all forms; poverty in America among children, their families and adults who are alone; hunger and homelessness in the cities and rural areas of America and throughout the world; the proliferation of guns and opioids into our communities; environmental degradation and the urgent threat of catastrophic climate change.

“Are we still able to hear Dr. King’s trumpet of conscience? Do we have the collective will to reset the course of our society to realize his vision of the Beloved Community?

“We have a choice today, and it is the same choice Dr. King identified before his death: ‘The choice today is no longer between violence and nonviolence. It is either nonviolence or nonexistence.’ The existential choice before us has become more urgent today than at any time in our lives since our beloved friend and pastor was assassinated more than fifty years ago.

“We cannot repair America and the world with hate, only with love.”

The choice is ours. Please honor Dr. King by identifying the ways you—as an individual and working collectively with others—will use this Call to Conscience from his friends as a call to urgent and sustained action.

Marian Wright Edelman is Founder and President Emerita of the Children’s Defense Fund whose Leave No Child Behind® mission is to ensure every child a Healthy Start, a Head Start, a Fair Start, a Safe Start and a Moral Start in life and successful passage to adulthood with the help of caring families and communities. For more information go to www.childrensdefense.org.