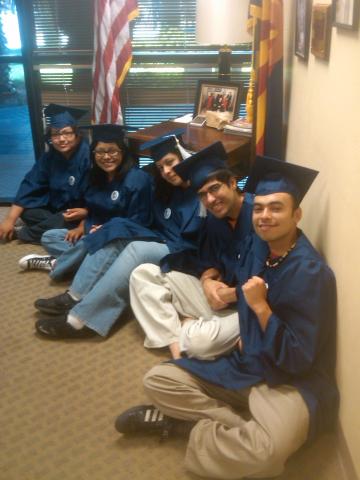 This post, authored by Josie Raymond, originally appeared on TalkPoverty.org. Undocumented immigrants like Ulises and his family need immigration reform to alleviate poverty. TalkPoverty.org is dedicated to demonstrating that we know how to dramatically reduce poverty; we just need to build the political will. Make sure to like TalkPoverty on Facebook and follow us on Twitter!

“As time went on, I saw how my own country, the place where I lived, was actually a bad place. I would see people fight and I thought that would be my life. I thought, that’s me–then I turned 4.”

That’s not a joke. Ulises, an undocumented 16-year-old high school junior living in the Bay Area, is a living example of poverty prematurely aging a child’s soul while impeding him in so many other ways.

Ulises was born in Mexico City in 1998. There were 16 people living in his house, his mom gave birth as a teenager, and his father left in 2003 to find work in California.

“‘For a better life,’” Ulises remembers his father saying.

Ulises and his father were close, and when they were separated, Ulises felt confused and lonely. His father sent money but not letters.

“I was so angry with my dad because there was so little information about him,” he says.

Soon enough, older boys from the neighborhood stepped in to fill the void. When Ulises was 5 years old, an older boy he calls Loco pulled him out of a scuffle in the street and earned his loyalty.

Loco was around 18 and a good fighter. He taught Ulises some martial arts moves, which would come in handy.

“I started getting into more trouble,” Ulises says.

Soon another man, older, whom Ulises won’t name, started plying him with food, like a hamburger covered in pineapple and jalapenos that Ulises to this day describes lovingly. In return, for reasons Ulises doesn’t remember or can’t understand, the man expected the little boy to fight.

“I really regret knowing him,” Ulises says. “He taught me not only how to fight but how to not feel anything, and to not give mercy. I was being used. Even though I was just a kid, I did things no kid should do. That doesn’t make me a kid. That makes me a criminal.”

At 8, Ulises’ mother told him the family would be going to the United States to reunite with his father. He didn’t believe her.  His grandfather drove his daughter and her three children the 30 hours from Mexico City to Tijuana, where they met a coyote who helped them cross the border. Ulises remembers walking through the desert for three days with a dozen strangers.

“My mom was more scared than I had ever seen her,” he says. “She kept looking at us [children], from one to two to three.”

His father met them at a safe house where the travelers left one by one.

“Finally it’s our turn and I don’t even recognize my dad,” Ulises says. “At first he didn’t talk to us, he talked to the person who brought us.”

His dad then drove them to Oakland where he worked as a cook in a Chinese restaurant.

Elementary school was hard for Ulises. Surrounded by Chinese classmates, he was bullied for not understanding English. There were fights and, finally, tears. He says it took 18 months to feel normal, but he still doesn’t feel welcome.

“The only thing I knew growing up was that this country didn’t want any immigrants here,” he says. “Both of my parents live in fear about it. They tell me, ‘Try to get good grades, be a nice kid.’ For years I was fighting and they never told me that in my own country.”

But in the opinion of Ulises and his parents, the difference in the United States is opportunity.

“In Mexico my mom was not able to look me in the eyes and say ‘you will be someone in life.’ And here she was able to say it,” he says.

Many of his old friends in Mexico are in jail, and he heard that Loco was shot and killed. Ulises is in high school in Berkeley and attends an after-school program called College Track that will be with him through college graduation. It’s where we met and set up the supports to help him earn a college-eligible GPA and a college-ready ACT score.

Ulises is also eligible for the California Dream Act, signed by Gov. Jerry Brown in 2011 to give undocumented students access to state financial aid and institutional grants at public universities.

“It’s a country where you can have a little bit of hope,” Ulises says.

Ulises narrowly missed the chance to work legally in the United States. Established by President Obama’s executive order in June 2012, Deferred Action for Childhood Arrivals (DACA) grants federal agencies prosecutorial discretion for young people who meet certain criteria, including entry into the United States before the age of 16. But Ulises, his sister, and brother are ineligible.

So while he waits for immigration reform, his family moves forward. His sister just started college, and his mom recently gave birth to a baby girl, a U.S. citizen. The family still lives below the poverty line, but Ulises dreams of majoring in business and earning a culinary degree, following in his father’s footsteps.

Josie Raymond is the Academic Affairs Director at College Track in Oakland and a former middle school literacy teacher and poverty journalist.